If you’re looking for Cool Wallets to upgrade your style, nothing says cool, relaxed, and sophisticated minimalist more than the Best Money Clip. And to this extent, if you’re okay adding a bit of controlled chaos to your style, you should consider the Gerber GDC Money Clip. 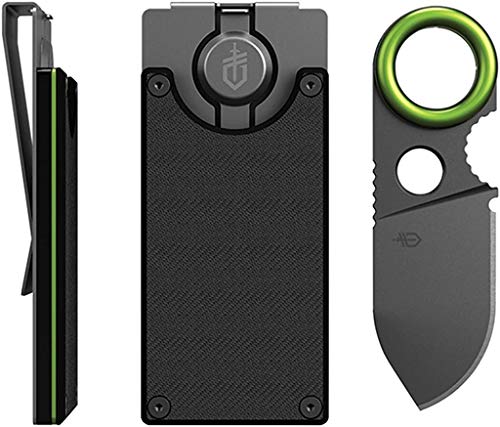 The Gerber GDC Money Clip may be as unconventional as they come, but that doesn’t mean it’s bad. In fact, the GDC is designed with utility and the rough-and-tumble adventurer in mind. It’s incredibly sturdy and the serrated thumb grips make pulling the knife out and sheathing it very simple.

The Gerber GDC Money Clip is designed, primarily, with utility in mind. To this extent, the 1.75 inch fixed blade length knife that’s perfect for the more outdoorsy type. Of course, you can also consider the CL Carbonlife Carbon Fiber if you don’t want your wallet to come with a knife, which is completely understandable.

The Gerber GDC Everyday Carry Wallet may be a little heavier than your average wallets, weighing a good 2.9 ounces, because it’s made from rust-proof materials and a titanium-coated steel body. It’s durable and can take a beating. Of course, you can consider the VIOSI Money Clip Leather Wallet for something much lighter and traditional.

It seems the people at Gerber really went all out with the utility function of the wallet, much like the Victorinox Swiss Army Money Clip did. As such, the wallet doesn’t contain any RFID blocking technology which is becoming more and more common among wallets nowadays. This sacrifice isn’t a good or bad thing, just based on your personal preferences.

The carrying capacity for credit cards is five, which isn’t the highest, but still a respectable amount. The only problem is that, when you’ve maxed out the credit cards, it’s hard to pull out the knife. Speaking of the knife, though, the serrated thumb-rest makes for a fine, sturdy grip when you pull out the knife or when you have to resheath it.

Despite its unconventionality as a money clip, the Gerber GDC still holds a pretty good score over on Amazon, scoring a respectable 4.5/5 stars based on a whopping 5,586 reviews. It is on the expensive side though. Almost double what other money clips usually cost. But that’s the price you pay for a wallet this durable.

It’s unconventional (who needs a knife with their wallet?), but it’s cool. The Gerber GDC Money Clip is sure to make you the talk of the town, or at least among your group of friends. I just wish they made it a little bigger so you could fit more cards and so the knife wouldn’t be so hard to pull out when those cards are maxed out.