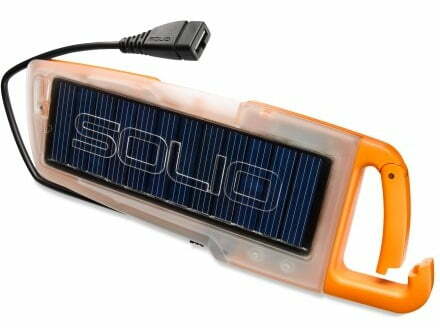 Running out of power is an all too common problem with portable game consoles, mobile phones, MP3 players, and digital cameras. The usual solution is to carry a power adapter with you wherever you go so you can recharge at the nearest convenient electric outlet (if you can find one). A second solution is to lug around a bulky battery pack that can provide additional power to your portable electronic device. Now you just have to worry about keeping this battery recharged at the same time as your electronic devices.
For another solution, look at the Solio H1000 charger, a portable solar panel designed specifically for recharging most portable electronic devices. Anywhere you can see the sun, you can use the Solio H1000 charger.

The entire unit consists of a solar panel and a battery enclosed in a plastic case with a built-in handle. The handle makes it easy to carry and its relatively small size 7.8 x 0.71 x 2.6 inches (198 x 68 x 18mm) dimensions makes it easy to slip in a purse or just hold in your hand.
A built-in cable clips to the top of the unit, but to plug it into any electronic device, you must use one of three included adapters: a full-size USB port (for iPods and iPhones), a mini USB port (for most devices such as Blackberrys, digital cameras, or Palm PDAs), or a Nokia N-series plug (for Nokia mobile phones).

Attach the correct adapter to the built-in cable, plug in your portable electronic device, and you’ll have two ways to use the Solio H1000 charger. The first and most obvious way is to lay the Solio device in the sun with the correct adapter plugged into the unit and your portable electronic device. This charges your device or lets you run it off solar power. The rated output is 1.5 to 5 watts.
A second way to use the Solio is as a portable battery. The Solio’s lithium-ion battery can is rated at 3.7V and 1000mAh. Charge up the battery by laying the device in the sun, or charge it up through an included USB cable.

However you decide to charge up the Solio’s battery, you can now use it as a portable battery pack so you can run your devices even in the complete absence of the sun. Just one hour of sunshine can equal approximately 15 minutes of talk time on a mobile phone or 40 minutes of music on a typical MP3 player.
Overall, the Solio H1000 is a great accessory for anyone who needs reliable power on the go. The addition of a battery to store power makes this solar panel useful even at night or when the sun isn’t shining.
Perhaps the biggest flaw with this device are its multiple adapters that you must use to plug it into different devices. If your portable electronic device doesn’t fit one of the three included adapters, you can order different adapters directly from the company.

More troublesome is that you’ll need to keep track of three separate adapters, which are small enough to lose easily. Take the wrong adapter with you and you’ll be out of luck. To be more useful, this device could have included a built in carrying case to hold all three adapters.

Overall, the Solio H1000 charger is a handy device for anyone who finds themselves away from power outlets during the day. Leave this device on your car dashboard to recharge, or haul it around wherever you go. Its extra bulk can make it slightly cumbersome to take with your portable devices, but you’ll find its ability to bring you power anywhere can be invaluable. 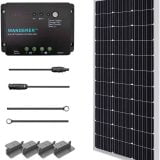 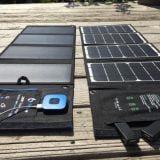 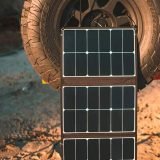 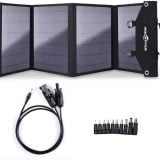 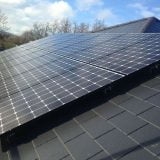 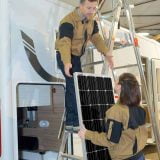