Coffee lovers choose between French press vs cold brew makers for their coffee on a regular basis. For some, it comes down to the desired beverage temperature. For others, it could come down to taste or brew time. Read on to find out more about the differences between these two products.

The best coffee maker ensures you get a consistent-tasting coffee every time you make one. French presses and cold brews use different methods to extract flavor, and you may have to plan for when you want to drink cold brews. If you want to find out the differences between a French press vs a regular coffee maker, check out our article.

Both of these methods use immersion, a method that requires the coffee beans to be steeped in liquid. However, a French press and a cold brew maker have many differences in how the coffee is brewed and the length of time it takes to extract its flavor. Because of all of the differences between cold brew machines and French press brewing, the resulting beverages seem like light and day.

A French press can be used as a cold brew coffee maker in a pinch.

Additional differences stem from the flavor itself, the use of filters, the container used, the water temperature throughout the brewing, and the use of pressure. The brewing process relies largely on time for both methods, but a French press also uses pressure to fully extract its flavor. Check out the differences between French press coffee vs percolator brews.

To brew a French press coffee, you heat water in a separate container, such as a kettle, and grind your beans in your grind machine. Then, you pour the hot water out of the kettle into the French press containing your coffee beans. After letting it steep for 3-4 minutes, you depress the plunger and filter, and you pour the cup of coffee into a glass. If you want iced coffee, you can add ice to the beverage.

On the other hand, the cold brew coffee maker combines cold water or room temperature water with coffee beans. While the grounds sit inside the cool water, extraction occurs over time. This type of coffee usually takes eight hours to 24 hours to complete this process, so many make it overnight.

Because of the lengthy extraction period of cold brew, the coffee takes on a significantly different flavor. A cold brew coffee features an extraction based on time instead of temperature, reducing the acidity of the resultant coffee. Additionally, cold brew coffee has been described as having notes of mild chocolate and mellow fruits in each glass.

Meanwhile, coffee brewers using a French press find that their coffee remains bold and rich. This flavor depends partly on the extended brew time compared to espresso or drip coffee. You may notice there are micro-grounds from your grind in your cup, little parts of coffee grounds that escape the filter. For some people, these particles create a heavy feeling in their hot coffee or iced coffee.

French presses require warm water when you combine the water with the beans. However, you still start with cold water since it binds with the flavors of your favorite coffees. Then, you heat it to just below boiling and steep it in the hot water. After the four minutes have passed, you allow the liquid to cool before serving.

A cold brew maker should steep in the brewing container for hours, so you should choose a French press if you want a quick glass.

What Coffee-To-Water Ratio Should You Use for French Press?

Can you make a cold brew with a French press?

Yes, French presses can make cold brew coffee. To do so, don’t heat the water before combining it with your coffee grounds. Let it steep for 12-15 hours instead of a few minutes before pushing the plunger down.

Cold-brew makers do not make coffee that is inherently stronger. However, you can get a cold brew concentrate that has higher strength and caffeine content than drip makers.

STAT: Multiple studies have demonstrated that unfiltered coffee tends to increase circulating LDL and triglyceride concentrations. This is due to compounds cafestol and kahweol, which are…retained in paper filters. (source) 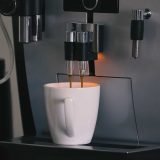 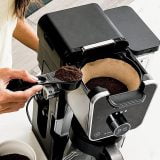 How to Make Strong Coffee in a Coffee Maker 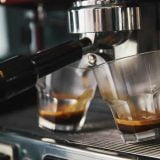 What is a Drip Coffee Maker 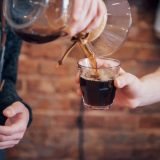 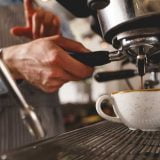 What is Descaling a Coffee Machine 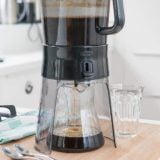