If the Best TV Antenna is beyond your reach, the Fosmon HDTV Antenna might give you a reason not to worry about it. While it isn’t the Best Rabbit Ear Antenna, per say, it does have respectable specifications. It has the ability to reach a tower from 40 miles away, capturing both VHF and UHF frequencies. 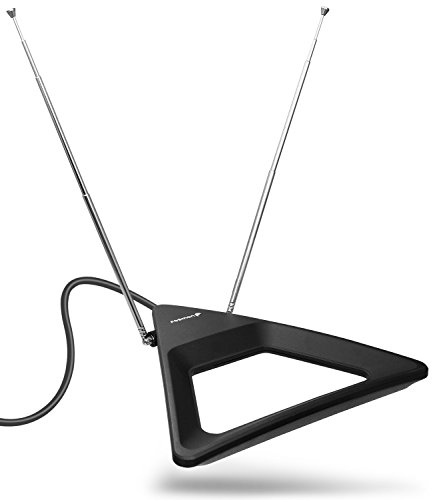 The Fosmon HDTV Antenna does the best it can do with the hardware it has been given, and yet it still manages to have a possible reception range of 40 miles and captures both VHF and UHF frequencies.

Depending on where you live, the Fosmon HDTV Antenna is either good or lackluster. Always consider your surroundings, no matter what TV antenna you get. It can capture nearby UHF and VHF frequencies fairly well when given the room to do so. You can improve the signal by placing it as high as possible, either on a shelf or, better yet, a wall mount to hang it on.

This is your standard plug-and-play HD TV antenna. It has a power cable and a 5-foot coax cable, which is rather small so you’ll have to likely invest in something longer if you mean to mount the device. Plug the coaxial cable into your TV’s coax port and you’re good to go!

If you were expecting the Fosmon Ultra Thin Indoor Digital TV Antenna to survive a nuclear bomb, you’re looking in the wrong place. It’s made of cheap plastic and metal, so handle it gently and don’t let it fall from any wall mounts you hang it from. The same can be said of the Philips SDV8201B.

Despite being cheaper than the Philips SDV7114A, the Fosmon Indoor HDTV Antenna actually has a slightly larger range of 40 miles Ten miles isn’t a lot, but it can make up the difference since TV antennas tend to wane at the very end of their reach. So, effectively, its sweet spot is 25 to 30 miles. You can choose to go with Lava HD 8008 Antenna, which has a range of over 150 miles and offers more than 45 HD channels.

If you’re desperate for free TV channels, and want to spend as little as possible, there’s definitely some value you can gleam from the Fosmon HDTV Antenna. However, you should also consider the cost of a longer coax cable and amplifier signal booster to keep the reception strong. Or, alternatively, you could get the amplified Antop Indoor Rabbit Ears TV Antenna.

The Fosmon HDTV Antenna isn’t going to change your life, but it will at least give you access to nearby free HD channels for the price of the antenna. You have up to 40 miles to work with, but it’s more like 25 miles, though an amplifier will help. It isn’t much, but it keeps a monthly bill off your list!