The Fancii USB Powered Portable Mini Table Fan is a fantastic table fan that replaces larger table fans while keeping the same amount of power and cooling capabilities. But with only two speed settings, it’s a little less precision-based. Check out our best desk fan list for even more great options! 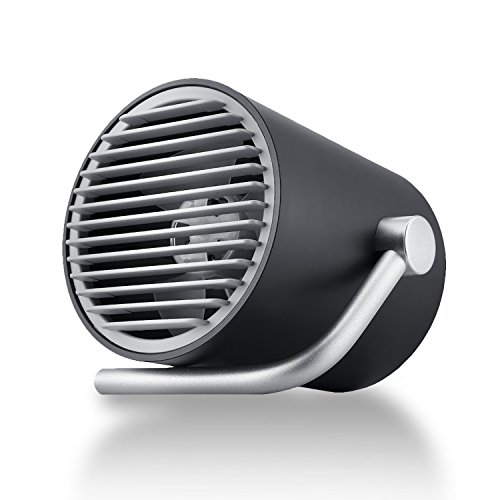 To provide maximum airflow in the shortest amount of time (4.2m/s). It’s 25% quieter than its competitors, ensuring it doesn’t disturb you, and weighs a measly eight ounces, ensuring easy portability.

The Fancii Small Personal Desk USB Fan’s Twin Turbo Cyclone Blade Technology provides maximum airflow quickly to keep you cool anywhere, anytime, whether it’s home office or outdoor travel. The fan only contains two speed settings though, low and high, making it less versatile than the Dyson Air Multiplier, which has an outstanding 10 speed settings. However, the Fancii is 40% more powerful which is impressive for such a small fan.

The Fancii Small Personal Desk Fan is small, compact, and lightweight which makes it one of the most portable fans around. In fact, it weighs in at only about 8 ounces which is among the lightest fans we’ve seen. This makes it not only perfect for your home or office, but can be safely stowed away in your luggage for travel too. If you do desire a bigger fan, consider the Holmes Blizzard Fan.

The Fancii Desk USB Fan Portable Mini Table Fan is rated to be 25% quieter than other similar, competitive models, such as the Vornado Pivot. So feel free to use it as you sleep without the fear of waking up, or in your home office while you’re working without breaking concentration.

The Fancii USB Fan can be tilted in any direction because of its 180 degree tilt rotation, allowing you to get an air blast from any direction you want. It can’t be mounted, but with a fan this small why would you want to? Its most modern feature is that it’s USB Powered which means you can plug it into your computer to get it going whenever you need to. This may sound a little out of the way, but plugging it into a power bank makes it work too, eliminating the need to bring your computer everywhere.

The Fancii Twin Turbo Blades Whisper Quiet Cyclone Air Fan is an inexpensive and powerful alternative to bigger desk fans. At $16.oo, it’s really not going to break the bank if you at least try it out. And while you may not get a choice of colors, the color it does come back, black, is the most versatile and will suit being placed anywhere in your home.

The Fancii USB Fan is great for indoor and outdoor use and is 40% more powerful which makes it on par with bigger, traditionally eight inch fans. And with 180 degree tilt rotation, you can make the fan cool you from wherever you like! It’s a shame you can’t decide whether you want it USB powered and battery, as needing to bring a USB cable around, with a power bank, with a charger for the power bank, can be cumbersome.