You may wonder whether an evaporative air cooler vs a portable air conditioner is better for cooling small spaces. These two methods use liquids to cool rooms or houses, but the best air conditioner is more accessible than a swamp cooler.

Comparing a Portable AC vs a Swamp Cooler

Both portable air conditioners and swamp coolers cool nearby air and release it back into your environment. Their cooling processes and effectiveness vary greatly, as do the components of the unit and operating climates. However, you can expect your system to make your home cooler regardless of which one you have. If you want to learn more about other AC options, check out the differences between a gas vs electric air conditioner, BTU vs Ashrae, and Blaux vs Arctic Air.

Swamp coolers, also called desert coolers, draw in outside air, passing it over water-saturated pads. As the warm air flows over these pads, the water evaporates into the air. This process is why swamp coolers are also called great evaporative cooling systems.

Using a portable AC can reduce your home’s temperature while eliminating some humidity from the air.

You can expect a desert cooler to cost about half as much to install as a whole-home AC system and a quarter of the price to run. However, it will require a constant supply of water while it runs.

Evaporative coolers must be used in dry environments only because they add to the present humidity. This factor is because they rely on the evaporation of water molecules to cool the air, something that’s hard to do when the air is already full of moisture.

Because of how air conditioners cool the air, they remove a little humidity from the air. This feature allows makes them great for ‌a wide range of climates and environments. In addition, some ACs have a DRY mode that optimizes this effect to reduce moisture to a comfortable range during the summer, and this option is available in a portable unit.

Air conditioning systems are used throughout the United States to cool houses and rooms to the desired temperatures of the inhabitants. Portable air conditioners are sometimes less effective than whole-home units, but they still significantly affect your space when used correctly.

On the other hand, swamp coolers can often lower temperatures by 15-40 degrees before they release the air back into the room. However, they work better in smaller areas than in large homes. Many people use them for cooling small spaces or a portion of outside air. If you use an evaporative air cooler inside, make sure you leave your windows partially open to allow the warm air from inside to escape through convection.

Do some air conditioning units really dehumidify the air?

Yes. Many home AC units feature a process that removes moisture, but the effect is not as high as a dehumidifier.

Does an evaporative cooler use a compressor to cool?

No. Evaporative coolers do not include compressors.

No. Evaporative coolers rely on the ability to release moisture into the air, and high humidity makes it hard for the water to evaporate.

STAT: Evaporative coolers could reduce your energy usage by up to 50% compared to air conditioners with refrigerants. (source)

Evaporative coolers release moisture into the air when they cool it, so they aren’t recommended for high-humidity environments. 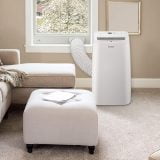 What Does E8 Mean on an Air Conditioner 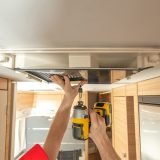 How to Reset an Air Conditioner 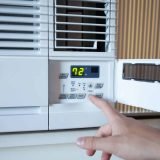 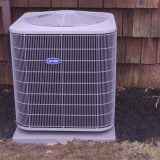 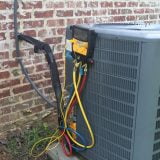 Can You Recharge A Window Air Conditioner?