If you think you need to spend a bunch of money for the best cool wallets, especially if you’re considering the Best Checkbook Wallet, then you probably haven’t come across the ESTALON Leather Checkbook Cover for Women and Men. It’s affordable, has a great assortment of colors, and can still hold everything you need it to. 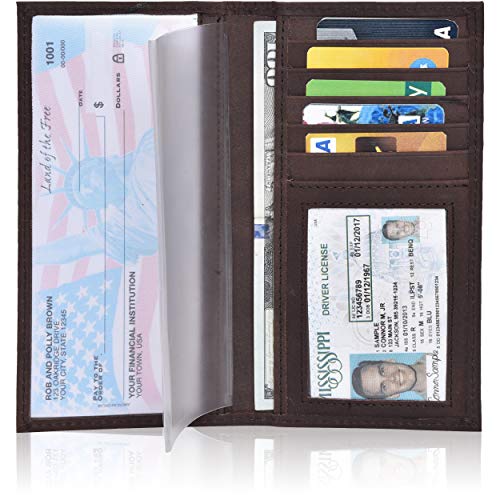 The ESTALON Leather Checkbook Cover for Women and Men stands out from the checkbook wallet crowd by sporting a minimalist design, yet still being capable of holding quite a few items inside like 10 credit cards, a checkbook, and if you decide to upgrade, a pen holder. Try out an alternative minimalist design for credit cards and cash described in the Fidelo carbon fiber minimalist wallet review.

The ESTALON Checkbook Cover Holder sports a minimalist design, called standard register, not ordinarily seen with checkbook holder wallets. This gives it its own charm separate from other wallets in its class. And like the Hiscow Wallet, the ESTALON Checkbook Covers offer an amazing assortment of colors to better suit your personal style. Pick one to cover you high-quality wallet such as the one in the Ermenegildo zegna review.

The ESTALON leather wallet is constructed from high quality genuine leather that is both soft and lasting. Perfect for those of you who will be taking it in and out of your pocket often.Of course, being of minimalist design, it will be a bit smaller than most other checkbook wallets, so consider the Kattee Men’s Vintage Genuine Leather Checkbook Wallet if you want something a little bigger.

ESTALON RFID Blocking is included with this wallet, which is a technology that blocks potential thieves from stealing your identity. It’s not commonplace on all wallets just yet, but it’s getting there. If you’d like another example, check out the Itslife Men’s RFID BLOCKING Vintage Look Genuine Leather Checkbook Wallet.

The ESTALON can still hold quite a wealth of materials. This includes one cash compartment, an ID window, and five credit card slots which can each hold two credit cards. There is even a divider for your duplicate checks, one for new and one for written. If you want, you can upgrade to a slightly larger version that comes with a pen holder.

The ESTALON is the most affordable checkbook wallet we’ve seen thus far. You won’t be breaking the bank when you buy it. But because of its minimalist design it won’t be able to fit a phone inside like most other checkbook wallets can. Further, although the divider is useful, it’s placed quite awkwardly within the wallet.

ESTALON Leather Checkbook Cover for Women and Men Wrap Up

The functionality of the ESTALON Leather Checkbook Cover for Women and Men is fantastic considering it’s so slim. It’s very durable too, making it great for people who travel a lot. It can’t hold your phone, like most checkbook wallets can, but that can be remedied by putting your phone in your other pocket.