Personal transportation vehicles are all the rage these past few years, leading some consumers to wonder what would happen if you pit an electric scooter against a kick scooter. The best electric scooters are great for recreational use and for running errands, how how do kick scooters fare? Keep reading to find out.

Differences Between an Electric Scooter and a Kick Scooter

Of course, the primary difference between a motorized scooter and a kick scooter is that e-scooters are powered by electric motors, and kick scooters are human-powered. This is a unique comparison among micro-mobility vehicles, as even if you were to compare an electric scooter vs. a hoverboard, you would find that both featured motors and batteries. Here are other differences you should consider before making a purchase.

No matter which type of vehicle you choose, be sure to always wear protective gear during rides. This includes a helmet, knee pads, and more.

As previously mentioned, kick scooters are propelled by the humans riding them and not by powerful motors. In other words, in nearly any scenario, a motorized scooter would have a clear edge when it comes to max speed. Motorized scooters can travel up to 20 miles per hour in some instances, whereas a kick scooter can only travel five to seven miles per hour and even less going uphill. If you are looking for a vehicle with a comparable speed to an e-scooter, consider thinking about an electric scooter vs. a one-wheel scooter. Additionally, you could check out electric skateboard vs electric scooter for something that is a little easier to learn than a one-wheel. Lastly, if you are interested in a comparison of two speedy models, check out the comparison of electric scooter UberScoot 1000w vs Speedway 3.

Electric scooters may have the edge when it comes to speed, but kick scooters are generally regarded as being safer for kids and adults to ride. Motorized scooters feature sensitive lithium batteries, which have had safety issues in the past. Additionally, the extreme speeds motorized scooters can reach make them less safe than kick scooters. Both vehicles can use the bike lane, however.

Kick scooters are much more durable and long-lasting than motorized scooters and other electric vehicles, including electric bikes. They are generally made from high-grade materials, such as steel or reinforced plastic. They also lack an electric motor, meaning less risk of something breaking down. Kick scooters have no battery life to think about, no motor to worry about, and no sensitive gyroscopic balance system to calibrate. The best kick scooters also include pneumatic tires.

Regular kick scooters tend to cost less than motorized scooters for the same reason they tend to last longer. There are no expensive electrical components to drive the price up, and they have been around for decades, giving manufacturers plenty of time to refine the manufacturing process.

Should I ride a kick scooter to work?

You can certainly ride a kick scooter to work, though it may not be sensible to do so on extremely hot days, rainy days, or during snowstorms.

How can you commute on a kick scooter?

This will depend on the hilliness of the terrain and the overall fitness of the rider. These vehicles are human-powered, after all.

STAT: According to the Road Traffic Act of 1961, all e-scooters are considered to be “mechanically propelled vehicles”. (source) 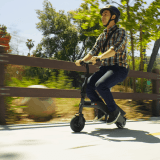 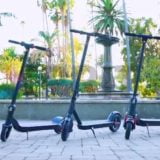 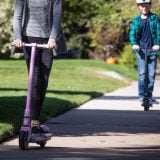 How Are Electric Scooters Made 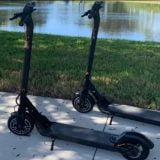 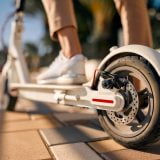