For those of you in the market for the Best Cool Wallets, but still want the functioning Best Tactical Wallet, you might be interested in the Ekster Senate Wallet. It takes that fine leather look and incorporates a unique card slider system to eject your cards (slightly) into a fan-like position for easy access. 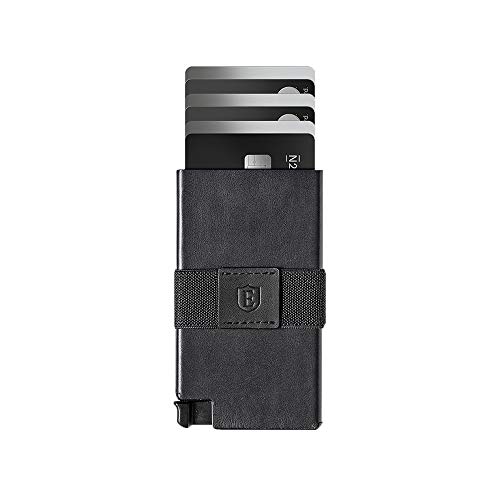 The Ekster Senate Wallet uses a unique card ejection trigger to fan out your cards, rather than make you pinch with your fingernails to reach your credit card. It’s also surprisingly thin, with a cash strap to hold cards or cash.

There’s no doubt about it: the Ekster Senate Wallet is one fine looking wallet. Its premium top-grain leather looks especially good in juniper green or merlot red. It’s better crafted than the amateur-looking Trayvax Element. However, the plastic bits sticking out are jarring, which the wallet Ekster Parliament doesn’t reveal as much.

For this price, the Ekster Wallet’s durability is called into question. Aluminum is apparently used, but user reviews state this isn’t the case, and it’s actually plastic. While plastic has a long shelf life, it can break easily. And break it has, even from dropping.

How well the Ekster Senate Wallet functions is mixed. Its unique trigger system is neat, but introduces the possibility of jamming, and several users have reported as such. For the most part, it appears to work as intended, but can often stick or lock into position. At least with the simplistic Trayvax Ascent, you never have to worry about anything jamming.

Measuring just 4.65 x 2.87 x 0.83 inches, the Ekster Senate Wallet is slightly smaller than the Magpul Daka Everyday Wallet and fits just as easily into any of your pockets, front or otherwise. However, it’s equal in versatility to the Magpul Daka Everyday Wallet, except for one thing: a GPS tracker. If you pick up a tracker card, you can actually track your wallet. It’s an invaluable trick, to say the least.

Despite being unique and good looking, the Ekster Senate Wallet is asking for too much. You could pay as little as $60 or as much as $79, depending on the color you get. Either price is, to be frank, a bit outrageous. This is especially true when you consider the conflicting reports on durable and performance.

We wouldn’t say the Ekster Senate Wallet is a risky buy; it doesn’t appear to be as such. What we will say is it’s a bit expensive. The unique ejection button is definitely a great idea and puts a nice spin on the minimalist wallet. However, build quality doesn’t seem to match the price. Wait for it to go on sale, then go for it.