Looking for the best iPhone cases? Aside from dropping your phone, the biggest danger comes from it getting wet. And since smartphones have become the gadget du jour of today’s digital lifestyle, not carrying it around because it looks like rain or leaving it at home during a run or biking isn’t going to happen. But it’s fair to say that the phones we love so much just don’t take this into account: accidentally get your iPhone splashed by a sudden shower or loosen a grip in a bathroom to have that Android phone fall into the toilet and you can kiss them goodbye. Even if they don’t get soaked, a little water sneaking into the headphone jack or between the seams will be “game over.”

The solution, apart from having God-like powers to always keep the phone dry, is to have a case you can use that will keep moisture away from the phone but let you continue to use it. It should be portable enough to be an easy setup when needed, and not something forced upon the phone all the time. It also needs to avoid inhibiting any of the phone’s functions — be that listening to music, making a call or taking a photo. And it wouldn’t hurt if it came in a one-size-fits-all model. Hey — DRYCase’s waterproof phone, camera and music player case does all that. 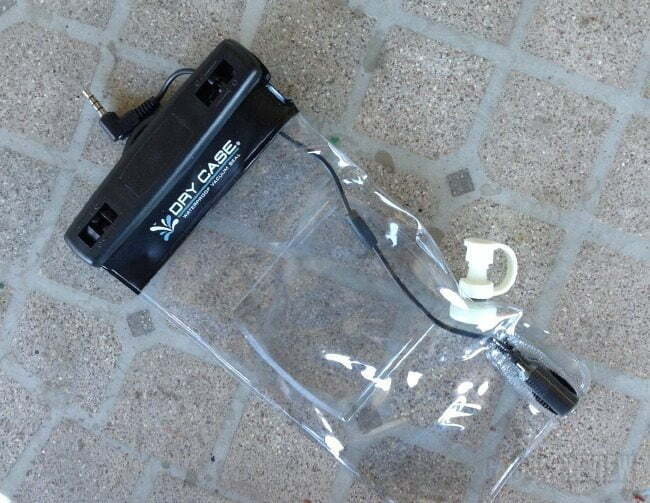 First, it’s more like a plastic pouch — make that waterproof sealant material — in that any size phone can be inserted inside. Since it’s crystal-clear, obviously you can take pictures through it. But being waterproof means that it has to maintain its integrity in a way that can laugh at being dunked in a pool or  — should you be a bit off the wall — hugging your body while showering. Or to be more consistent with what waterproof cases for mobile devices are usually used for, while swimming at speed in and under the water.

Related: If you like taking your phone with you when you’re biking, then you’ll love our Biologic iPhone 4 Bike Mounted Case review.

How the DryCase does this is fairly clever — it uses a vacuum seal that promotes the exclusion of water entering the pouch. The process involves first placing the phone (or MP3 player or camera) inside — having first inserted the interior headphone jack into the phone’s input. The top is then closed back up and the air removed by using a bulb against an external gasket. 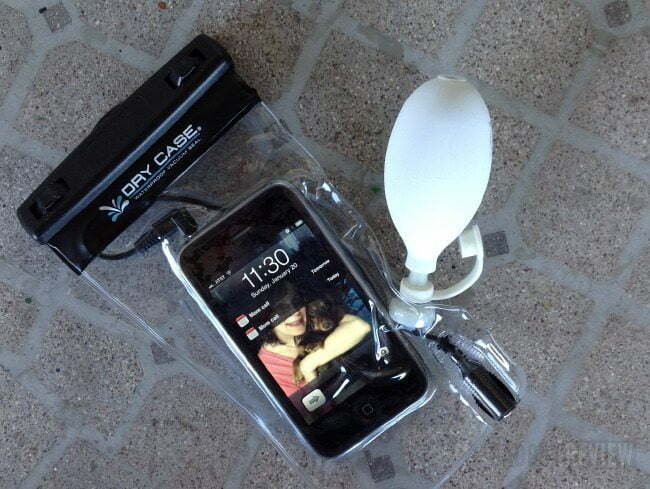 But unless you’re only anticipating the phone being the one to get misted or just damp at the most by being stored safely away in a pocket or coat jacket, then you might want to use DryCASE’s DRY BUDS. This pair of in-ear headphones come with the expected microphone and in-line button control and are totally waterproof and submersible up to 10 feet. If you hail from a “wet” part of the country — or just want the peace of mind of being able to have earbuds on while sweating during a sport, this becomes a good choice. For example, I didn’t have any issues with going outside during the rainy season that we get here in SoCal during late Dec/early Jan with my phone in my pocket, but I didn’t wear earbuds (or even consider a costly Bluetooth pair) because I knew they could get wet and ruined. I held the DRY BUDS under running water for five minutes, shook them off and plugged them into my phone and they worked perfectly.

But getting back to the DryCASE, the best way to prove its abilities is to try it out. But first I’ll run through doing it just to make sure I know what to expect. So I twist the two clamps outward and snap the top two sections of the DryCASE apart — these tabs do not move lightly, so expect to expend some serious pressure on each of them. In goes an old iPhone, first having inserted the interior headphone jack into its audio output. The procedure is now reversed to close the top. DryCASE suggests sliding the velcro-locking armband through at this point if you plan to wear the DryCASE (the armband is also buoyant). Then it’s just a matter of pushing the bulb over the outer gasket and in a few presses, a vacuum seal is created. DryCASE suggest waiting a few minutes at this point to ensure that the vacuum seal is locked in. To remove the phone, just twist the tabs back open, separate the two top sections and pull the device out — as the bag is clingy, expect to “nudge” the device out. 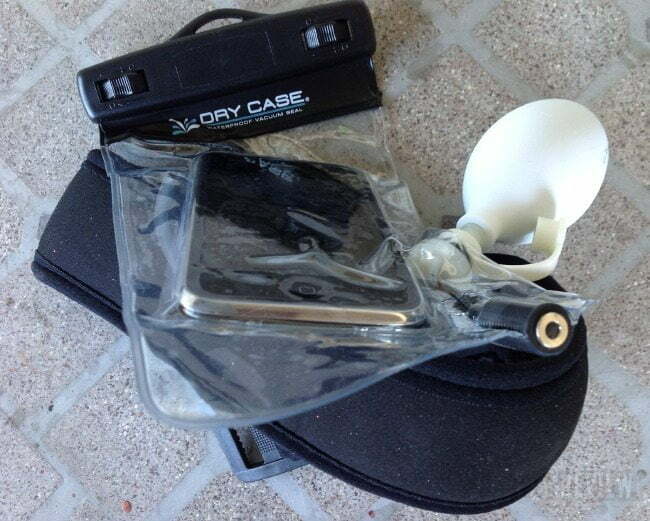 Now I see the biggest obstacle to using the DryCASE correctly is not closing it right.  So instead of going full-bore with an electrical device that could be destroyed by my own stupidity, I’ll use something a lot less expensive but a whole lot more obvious should it get wet: crackers.

With someone else running the camera, I get into the bathtub. It takes me very little effort to rotate the two tabs at either end at the top of the DryCASE — then pulling the two top sections apart carefully is the next step. I purse the top so that the opening is wide and reach for the crackers, which I then place one after the other inside. I used both full-sized and  half sized crackers to mix things up, but the main issue is that they’re fresh and easy to read should they get wet. Closing the top sections of the DryCASE is easy, but getting the two tabs lined up properly takes a bit of doing — they have to properly catch on a slot in order to not just close correctly, but close in a manner that will allow for the vacuum seal to occur.

Speaking of which, the bulb provided slides on the gasket simply enough, but if you don’t turn it a bit it will come off once the vacuum seal is created — as I found out after just a couple of squeezes. But the good thing is that you can see that the vacuum has occurred because of the way that the DryCASE is clinging against the crackers — holding them firmly in position and not breaking them apart at all.

All that’s left is to run the water and drench the DryCASE from a couple of different angles and then turn the water off. Rotating the tabs again releases the vacuum seal and there’s no problem in opening the two sections and removing the dry crackers. That the crackers did not suffer any water damage is evident both from my snapping the pieces between my fingers as well as my crunching on them.

As can be seen from the video, the crackers stayed completely dry — they tasted good too! While I had a bit of a time getting the tabs to close, it’s that it’s just a matter of holding the case at an angle relative to each tab and doing it a few times to get the hang of it. Later I bit the bullet and took the case with the iPhone in it to the pool outside and dipped it in hesitatingly for about 10 seconds before taking it back out. It was fine, but scares to my heart like that I don’t need. Pretty cool. I can see how this would make a great little case for turning a “point and shoot” digital camera (or any small model) into an all-weather camera for taking on the trail or using underwater.

Bottom line: The DryCase waterproof phone, camera and music player case performs as advertised — its vacuum seal makes for a waterproof enclosure that in no way inhibits the use of the electronic device placed inside. Other such enclosures on the market are specialized for a phone or camera, but $39 buys you a one-size-fits-all that really works. Plus it can be folded up for travel/storage when not in use. 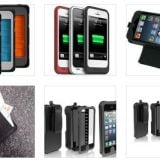 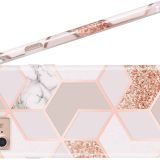 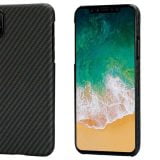 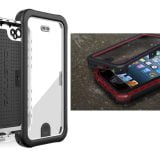 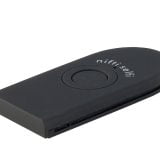 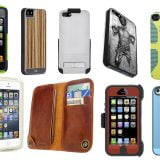