If you have a GoPro lying about, naturally you’d want the best drone for GoPro as a companion. For those with deeper pockets, one suggestion is the DJI Phantom 2 Drone. Its fast speeds and long-distance give it a well-rounded flying experience and a top-rated drone. And video stability is handled by its excellent 3-axis gimbal system. 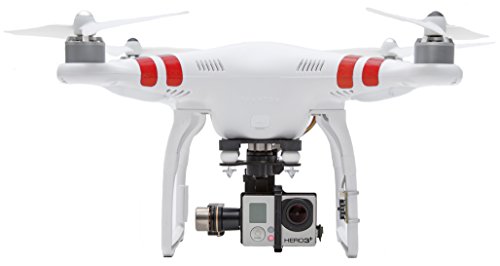 The DJI Phantom 2 is all about getting the right shot and angle, whether it’s with its 3-axis gimbal system or ground control feature. One stabilizes the camera, while the other gives you a hands-off experience.

Powered by a 5200mAh LiPo battery, the DJI Phantom 2 has a flight time of up to 25 minutes, which is about 10 minutes above average. More importantly, it can zip around the sky going 33.5 miles per hour or 15m/s. Go through our Dji Mavic Pro Quadcopter for a drone with a wide range.

The DJI Phantom 2 is primarily made of plastic (aside from hardware and gimbal). That’s not necessarily bad; in fact, it keeps it lightweight and certainly helps the drone reach its maximum range of 1000m (limited by the controller). The Altair Aerial Blackhawk, on the other hand, is made of lightweight metal.

Like the Yuneec Q500, the DJI Phantom 2 has a gimbal system for better image stability. This comes in the form of its Zenmuse gimbal, specifically the 3-axis H3-3D, making it so video recording is incredibly smooth. And yes, it does support GoPro cameras (note: GoPro’s Wi-Fi can interfere with the drone’s transmitter). But, that’s unlike the Drone GoPro Karma, which fully supports GoPro cameras.

The most important feature is the DJI Assistant software, which opens up settings and options for updating firmware and calibrating sensors. Then there’s Auto Return-to-Home, sending it back to its launch point; GPS mode for improved flight control; and a “No Fly” zone feature to ensure your drone stays out of trouble. It also comes with Ground Station support, giving the drone a path to follow autonomously while you snap pictures and create videos. Also, take a look at our DJI Phantom 2 Vision review for a drone that can be set up with no tools.

What holds the DJI Phantom 2 back is the lack of a remote control, which means you’ll have to rely on your mobile device. Even worse is the hefty price, limiting who’d buy one down to experienced fliers. It’s a great deal for them, but not so much for newcomers or amateurs. If either applies to you, or you’re on a budget, the 3DR Solo Drone is easier on the wallet.

Taking everything into account, the DJI Phantom 2 has just about everything you would want out of a drone while setting the bar. It’s most at home in the hands of experienced fliers, since they’ll best use the 3-axis gimbal. However, newcomers can easily get the hang of its performance.