Nothing screams best cool wallets more than the Best Chain Wallet. And if you’re checking out these wallets, the Dickies Men’s Bifold Chain Wallet could be right up your alley, especially if you’re already a Dickies fan and own a bunch of their clothing. After all, they would go together beautifully. 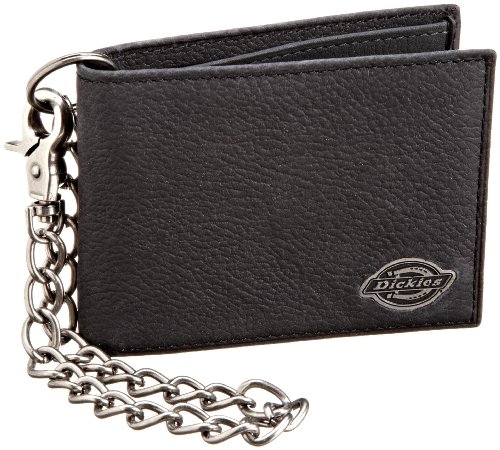 Why We Like It – Dickies Men’s Bifold Chain Wallet

The Dickies Men’s Bifold Chain Wallet is one of those wallets where you just can’t go wrong. It has a slim profile yet still manages to fit anything and everything you need it to, and it’s durable leather construction is sure to last you far longer than your money’s worth. As a fan of leather wallets, I would also like to recommend to you a slim wallet – if it fits your preference. For more details, read the Deezomo credit card holder review.

The Dickies Men’s Bi-Fold Chain Wallet includes 100% absolutely extraordinary craftsmanship and tight stitching. This really helps the wallet develop its snug profile and sleek design. The Dickies logo isn’t too showy either, being simply embossed on the lower right of the wallet. If you would like something with a touch of sophistication instead, try the LUUFAN Men’s Genuine Leather Long Wallet Chain Wallet. But if you like chains on your wallet, what about the 4″ chain on the wallet described in the Distressed natural brown leather trifold chain wallet 4 review?

The Dickies Wallet comes with 100% leather construction. The tight stitching mentioned previously also aids greatly in helping the wallet stay together through all measures of abuse. On a sadder note, the color variety on the wallet just isn;t there, so consider the Levi’s Men’s Trifold Wallet for more variety.

One thing missing from the Dickies Wallet is RFID-Blocking Technology. It’s not mainstream yet, I’ll admit, and plenty of wallets still don’t have it. But the day when it is mainstream is fast approaching. It will be here before you know it, so consider the Itslife Men’s RFID BLOCKING Brown Bifold Vintage Hand Made Leather/Metal Chain Wallet if you want to be ahead of the curve.

The Dickies Wallet is rather spacious inside. It contains four card slots for your credit and other cards, two slip pockets for even more room to store cash and receipts, a cash pocket, and an ID window which includes a thumb slider to make pulling out your ID easier. You’d be surprised how many wallets don’t have this.

One of the best things about the wallet is just how affordable it is. It’s one of the highest-rated wallets we’ve seen, and it still costs much less than most of the wallets in its class by a good $10-$12. Speaking of well-reviewed, the wallet holds a respectable 4.5/5 star rating over on Amazon based on a whopping 5,437 reviews.

We’ll let the lack of RFID-Blocking Technology slide, at least for now. Hopefully they’ll include it in their next rendition of wallets. But other than that, there’s nothing to complain about with the Dickies Men’s Bifold Chain Wallet. It’s a great, versatile wallet that’s sure to last you for years to come.