If you are shipping for a new camera, you may be comparing CMOS vs CCD digital camera sensors. The best digital cameras, after all, tend to include one of these image sensor types. Keep reading to learn all about the differences between the two image sensors.

Generally speaking, image sensors fall into two categories: CMOS and CCD. CMOS sensors, which stand for Complimentary Metal Oxide Semiconductor, are found in the vast majority of consumer-grade still photography cameras, as they are inexpensive to manufacture while still delivering professional results. CMOS image sensors transform light particles into charged electrons, which are then transformed into images. CMOS sensors tend to resemble any garden variety microprocessor chip. Due to their low cost, you will almost always find CMOS sensors when comparing compact cameras or when comparing refurbished vs open box digital cameras.

CCD image sensors, which stands for charge-coupled device, is a specialized chipset that works somewhat differently from CMOS sensors. Light and electrons are transported across the chip with little to no distortion and a low noise ratio, which creates a better image quality. For this reason, CCD image sensors are found in high-grade still cameras and many professional-grade video cameras. You’ll also find different sensor sizes when comparing digital cameras. But, if you are comparing a cell phone camera to a digital camera, you will always find a CMOS chip in mobile phones, whereas the most expensive digital cameras may include a CCD sensor.

CCD sensors are more sensitive to light than CMOS sensors, thanks to the nature of the design. Each pixel of a CMOS sensor is surrounded by power-giving transistors and as light hits the sensor, some of the light particles accidentally hit a transistor instead. The end result? A slightly reduced light level.

CMOS sensors can fit nearly anywhere and can be manufactured in a multitude of shapes to fit nearly any device. This is why you will find CMOS image sensors in computers, tablets, phones, and just about anything else that requires a camera. CCD sensors, on the other hand, are more specialized.

As previously mentioned, CMOS sensors are budget-friendly, thanks to being readily available and cheap to manufacture. CCD image sensors tend to be much more expensive, which is why you typically find them in professional-grade cameras. Alternatively, you’ll find better pixel quality in high-grade digital cameras, like 16MP and 20MP pixels.

CMOS sensors are by no means lesser than CCD sensors, as the image sensor is only one component that goes into the final product.

Is CCD always better than CMOS?

Not necessarily, as it depends on the use case scenario. Though the digital signal imparted by the CCD sensor features less noise than a CMOS sensor, many other factors can impact the image quality, such as the electrical signal, light sensitivity, and whether or not the camera has a rolling shutter.

Is CMOS catching up to CCD?

CMOS sensors are catching up to CCD sensors, as manufacturers are constantly making strides to improve the technology. Modern digital images made with a CMOS sensor often rival even a decent CCD imaging sensor.

Do phones use CMOS or CCD?

Nearly every smartphone uses CMOS image sensor technology, as the tech is smaller and cheaper to produce. 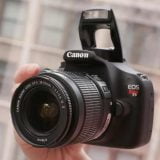 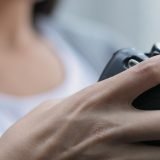 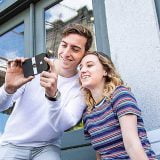 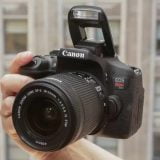 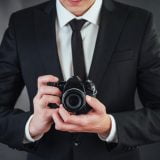 How to Take Black & White Photos with a Digital Camera 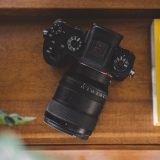