Not everyone wants a vlogging camera stacked with 4K (or even 1080p), not to mention your budget might not allow it, but still want to vlog with decent quality. The Canon PowerShot ELPH 190 IS offers that niche with a 20 megapixel image sensor and, more importantly, 720p video capturing capabilities. It might be the best vlogging camera on a budget. 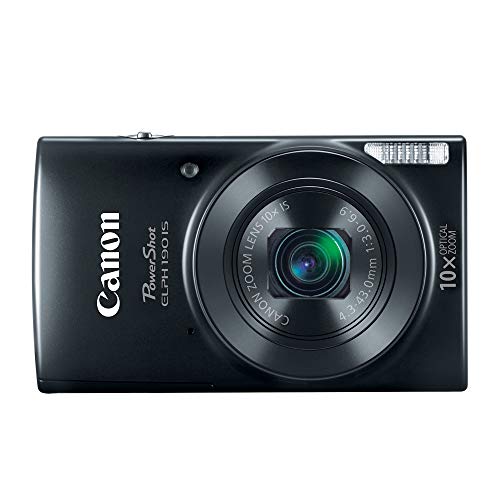 The Canon PowerShot ELPH 190 IS, in its compact nature and size, can give you the power of 20 megapixels and 720p video—but fits right in your pocket.

For such a cheap camera, we were rather surprised by the ELPH 190’s 20 megapixel camera. Then again, this is Canon we’re talking about. Its image quality is captured by combining its 20 megapixel CCD sensor and DIGIC 4+ image processor. What impressed the most, however, was its optical image stabilization. This kept pictures clear and focused—especially with its wide angle 24-240 mm F3. 0-6.9 10× zoom lens.

Battery life is okay at 190 shots, but even better in ECO mode, bumping it up to 240 shots; 50 minutes of video otherwise. Speaking of which, the Canon PowerShot ELPH 190 IS only shoots at 720p. Now, to be fair, 720p HD video is still good. Plenty of YouTube channels stop at 720p. If you want 1080p, check out the Canon Vixia HF R700 Camcorder Vlogging Camera.

What you’ll immediately notice about the Canon PowerShot ELPH 190 IS is its size; it’s a very compact camera. You can easily tuck it into your pants or, better yet, into a purse of backpack of some kind. On the right-hand side are buttons such as a dedicated video button, auto mode, scene modes, a Wi Fi button, and a hidden memory card slot.

The Canon PowerShot ELPH 190 IS’s major flaw is a fixed LCD viewfinder. For someone vlogging, you’d like to see your face and how it looks to a viewer, unless you’re really good at eyeballing it (or use software).

Related: Take a look at our Canon Powershot N review

The Canon PowerShot ELPH 190 IS is in a strange place. On one hand, it does well as a really affordable point and shoot camera; 20 megapixels takes great images. On the other hand, it isn’t terrible at taking videos—720p, various scene modes to add—and comes with motion blur correction if you’re on the go and stability while you’re holding the camera.

Canon PowerShot ELPH 190 IS Wrap Up

When you’re on a tight budget, the ELPH 190’s 720p video quality is easy to look past; plenty of YouTubers still upload regularly in 720p (it’s easier on your internet anyways). What isn’t is its fixed viewfinder—but that can be handled through software via PC. And when you aren’t vlogging, you can take some great photos with its 20 megapixel image sensor.