If you’re on the market for the best DSLR camera, the Canon EOS 90D continues to be one of the best examples of that technology. Built with additional features to improve the design of its mirrored insides, the EOS 90D gives you every reason to wield its hefty frame, provided you can master it. If you want a camera for your Canon, take a look at our page from when you could win a case, Logic DCB-308 SLR Camera Sling Bag. 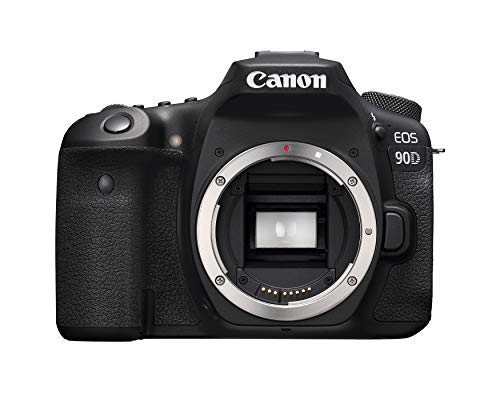 As cameras move away from mirrors, the Canon EOS 90D proves that DSLR cameras can still remain relevant with its amped performance and oodles of additional features.

Image quality is lower than the Nikon D810 by a small amount but still absolutely superb with it being a 32.5 megapixel CMOS sensor; otherwise known as an APS-C sensor, also found in the Canon EOS Rebel T6i. It isn’t necessarily a new sensor, but you’ll still get stunningly high resolution images, especially with its Pixel AF performance. Using Dual Pixel CMOS AF, the 90D will autofocus on the right moments. Using Live View has been streamlined. Dual Pixel Autofocus combined with Live View mode and 18-135mm USM lens makes continuous shooting of fast action through the optical viewfinder an easy task.

The EOS M6 Mark II’s AF system works a step better than the 90D, but still performs well in low-light environments. AF points up to 45, but vary depending on the AF mode—which is nearly four times as many AF points than the Pentax K-S2 offers. Shutter speed is phenomenal, pumping out 10 frames per second. Again, a product of its APS-C CMOS AF system, making it quite the image sensor.

If you’re looking to use the EOS 90D for video capture, you’re in luck. You can shoot in 4K at 30 frames per second. Aside from video, battery life is excellent, providing you with an easy 1,860 images before they die. Buffer capacity sits at 25 RAW files—58 JPEGS. For shooting RAW images, it isn’t the greatest, but there’s plenty to work with.

The number of features inside the Canon EOS 90D is only matched by its size, a one and a half pound behemoth of a camera body It isn’t uncommon for DSLR cameras to be on the heavier side, but its overall shape and weight can sometimes make it unwieldy. You wouldn’t put this camera in the hands of a novice.

The EOS 90D isn’t that far off from the 80D in terms of design—features like the second screen being at the top, or the joystick used to adjust the focal point. Along the top, just above the screen there’s a button for AF mode, drive mode, ISO (which has a high ISO range of 100 to 25,600), and a metering pattern. You can adjust the touch screen placed on the left. You’ll find a single memory card slot.

Looking at the EOS 90D’s performance, pricing, features, and build quality, you’ll find the 90D to be of excellent value, but only if you still hold onto DSLR. However, it has only managed to compete with mirrorless cameras because of how much extra features have been injected into the camera. With that said, it’s a Canon DSLR APS-C camera, an easily recognizable brand. You’re getting top quality with Canon cameras.

The Canon EOS 90D is a beast of a DSLR camera, both in terms of performance, but also size and list of features. This workhorse proves that DSLR isn’t ready to go just yet and has a few tricks up its sleeve, one of which includes turning into a webcam when necessary. Sure, its unwieldy and will take some getting used to—also very expensive—but since it’s also manufactured by Canon, you know you’re getting a superb product.