Caffeine in Coffee vs. Espresso

Because espresso is so closely associated with “shots” and powerful caffeine brews, coffee fans often assume that anything from an espresso machine naturally has more caffeine than “traditional” drip coffee does. So how much caffeine intake is there in coffee vs espresso?

But is that really true? Does the caffeine you take in from espresso and best drip coffee machines differ? Does dark roast or light roasts make a difference? Does the name espresso on beans mean that they are extra strength? Let’s turn to science to find the answers!

Caffeine Concentration: Espresso Lives Up to Its Reputation

All right: Ounce for ounce, espresso surely has more caffeine than drip coffee, right? Yes, absolutely: espresso is created with higher temperatures and greater pressures, designed to create a thicker brew that’s absolutely loaded with flavor…which is why espresso is so often combined with other liquids and syrups (more on this in a bit). The end result of this is more caffeine content.

How is there more caffeine? Well, according to Coffee Chemistry (a coffee lovers website) an average ounce of drip coffee has between 8.1 and 15 milligrams of caffeine. There’s a huge variance here, because there are so many ways to brewing methods, which can yield various results – as can how the coffee is stored and poured. But it gives us a range to work with.

An ounce of espresso, meanwhile, ends up having 30 to 50 milligrams of caffeine. Obviously a big difference! So when comparing the same amounts, espresso will have an average of 2.5 times more caffeine than the same drip coffee (putting aside service size, of course). Shot for shot, that’s a big difference, and it could be even higher depending on the pour.

Of course, espresso and drip coffee are rarely compared at the same amounts. When espresso is served alone, it’s typically served as a single shot of espresso(perhaps with a little flavor, depending on your country and preference).

When espresso is served as a larger drink, it’s usually only one or two shots mixed with milk, ice, syrup, foam and all the other ingredients found in various coffee drinks.

Now, look at how we drink drip coffee. When served in a single cup of coffee, it’s usually a much larger cup than anything espresso is served in. It’s also quite common to drink coffee out of thermoses and tall glasses, especially with iced coffees (which also tend to be a bit stronger). Always remember that serving size is important.

This can quickly add up: coffee vs. espresso, many people may be drinking twice as much coffee as they would espresso. This negates the difference, and may often mean that they’re getting even more caffeine from their daily cup of coffee habits –although not as much sugar and fat.

Beans and ground coffee often carry the label Espresso – but don’t read too much into that! Espresso, in this case, refers specifically to the general flavor of the beans. Espresso beans tend to a darker roast and a thicker grind than average beans, which makes them more suitable for espresso drinks.

However, that doesn’t mean that the caffeine content is actually higher. It’s easy to mistake bolder flavor for a stronger effect, but actually, this is no indicator that the beans will produce more caffeine or not. Think of it as a description of flavor and general advice on use.

A final note on coffee potency: Cold brews, as a type of coffee, have grown very popular lately, which is similar to drip coffee but generally takes more time and does not require hot water (and is typically served with ice, although this isn’t required).

The nature of cold brews not only leads to a stronger taste, but cold brew coffee also tends to have more caffeine in it, which throws comparison off a little if you only drink cold brews. Of course, this only applies to pure cold brews. Many people treat cold brews more like espresso, which means they mix it with other things like milk or all that ice, which will of course dilute the amount of caffeine and make it one of the weakest options. 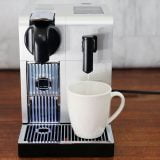 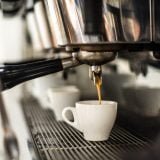 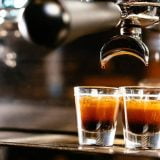 Caffeine in Coffee vs. Espresso 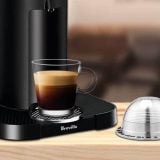 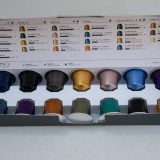