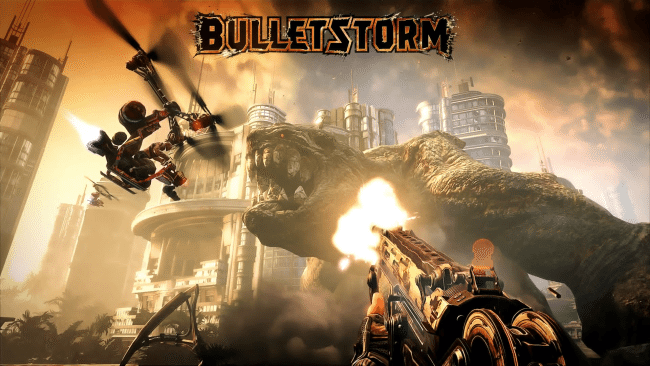 Once I had a great idea for a game. Stick a bunch of indestructible foul-mouthed ex-soldiers on a barren wasteland littered with broken glass, insane and heavily armed prisoners, and giant mutated monsters. A target is painted on your back at all times, but thanks to an unrepentant wit, a hide thick as nails, and a big boot to kick up anything’s ass, the whole ordeal is a gas. Get the best wireless keyboards to enjoy playing this game and others on a PC.

Then I forgot about it five minutes later and never thought of it again. Until Bulletstorm, that is. If you want more gaming options, you’ll love our review of the Xbox 360 arcade cabinet (for those who are serious tools).

From the minds with a fetish for thick arms and tough girls who love cargo pants, Epic Games brings us Bulletstorm, exactly the tale mentioned above exaggerated a thousand times over. It’s immaturity in videogames at its finest…what I thought would be the coolest videogame ever when I was 15. In writing this review, I feel old like Clint Eastwood in Gran Torino. Get off my lawn, or I’ll blast your brains out kid. Feelin’ lucky? Now to make gaming easier, check out the new Microsoft Xbox, keyboard, & mouse compatibility. 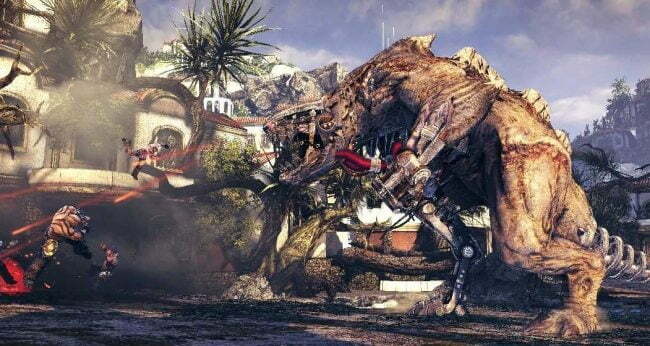 The frustrating section involving a remote-controlled dinosaur is brilliant. Carnage all around.

Starring a cast of ape-men who swear more than they talk, players will have trouble immersing themselves in the world of Bulletstorm. The cursing and banter is funny for all of thirty seconds, then gets old. Protagonist Grayson Hunt is so tough that we need to hear about it every few minutes, lest we forget. Every soldier is so tough that we need to be constantly reminded that they have balls of steel, that their pants are always too tight, and that they can down a bottle of anything and still kill everything in sight. Real old, real fast. A side note, if you want a quality wireless keyboard for your TV box, tablets, and phones, check out our Rii i4 mini review.

Assuming you are that 15 year old, have fun. This is the sort of game parents dread, not because of the gore or violence (it really isn’t that bad…relatively speaking). No, the characters curse like sailors, with mouths so filthy a soap-Listerine-rubbing alcohol mouthwash can’t fix. When your kid comes home saying “Mommy, what does (your four-letter word of choice) mean?”, it’s already too late. Thankfully lewdness is strictly verbal…and, well, gory and blood-filled. But the latter isn’t so bad (relatively speaking). To play your favorite PC games with a clicky full-size mechanical keyboard with programable RGB and G keys, click our Logitech G915 review.

Adolescent potty-humor aside, the main function of Bulletstorm is not only about killing everything, but making it look good. Hardcore gamers may or may not enjoy the game for that exact reason: if you are interested in accuracy, eliminating oponents and moving on to win the game, Bulletstorm is not for you. But if you enjoy tea-bagging, acting like an ass online, and really have no sentiment for actual combat and would rather humiliate friends and strangers alike, then Bulletstorm sounds right for your candy ass. 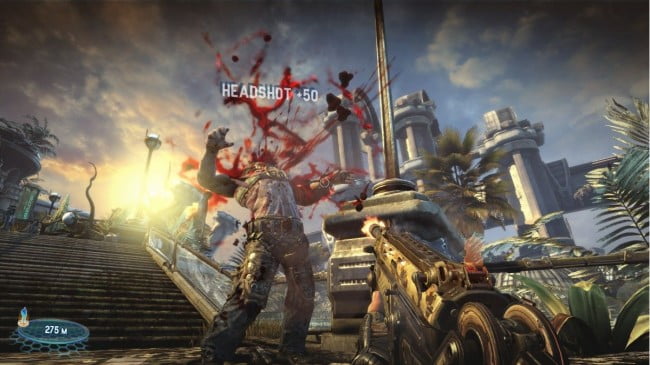 Developer People Can Fly achieves this in two ways: first, everyone is a bullet sponge. Take 50 bullets and hey, look, a scratch (well-placed shots can of course do serious damage, including one-hit kills). But forget about hits and focus on actual killing. Why just shoot bullets when there are more painful ways to torment enemies? Why not cut them in half, blow them up, fire exploding cannon balls, rip them to shreds with .50 caliber rounds, or worse? Better yet, get a group of uglies together and share the pain – be economical about it. No need to waste precious ammo when fireworks only require one bullet.

Every kill earns points, but each also has the opportunity to earn more points for specialty kills. Each weapon has a truckload. Kicking an enemy and filling their rump full of lead has a bonus, as well as a very pleasant visual of their corpse violently defecating. Shoot a chained mine around an enemy’s head and then wait for it to explode has two bonuses, for the headshot and the torturous waiting. Shoot a man in the crotch, watch him suffer and then end his misery for yet another award. Bulletstorm isn’t a shooter; it’s a robust embarrassment machine. It runs on the imagination of 13 year olds boys who worship Quentin Tarantino.

Whether or not that’s fun is entirely subjective, as mentioned earlier. It depends on how you enjoy first person shooters. Don’t expect to sit back and relax with a beer after a hard day at work playing Bulletstorm though. It’s demanding. The game practically requires your eyes stay glued to the TV so players don’t miss a thing. Levels have too many traps and pitfalls – built in or placed by opponents – to cheerily skip through. It requires a fully-active – and creative – brain to win. 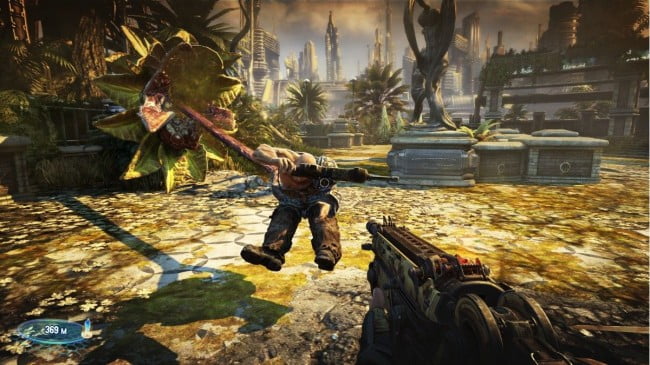 Everything is trying to kill you, including the local flora. That doesn’t mean they can’t still be fun

Bulletstorm is certainly fun with friends, especially as a sort of “OH NO HE DIDN’T” game where every kill sparks a laugh, a bitch-slap, and a good time for all. But playing competitively effectively decimates the game’s premise of not taking any of it seriously. To play well, Bulletstorm requires a more serious, more attentive focus than most ‘standard’ shooters. Oh the irony.

As a single-player game, unless your favorite word is fart, poop or an expletive far worse, Bulletstorm is beyond over the top. Combat against AI is fun at first and challenging enough to remain enjoyable, but it isn’t satisfying. Sure, whip an enemy into his buddy’s rocket and watch the explosion wipe out five guys, and it’s a blast. But those are moments of enjoyment, not a signature of a fun game. Bulletstorm requires a lot of work from players to remain enjoyable. It isn’t simply fun. The fun is determined by how fun you make it, and how much you enjoy the violence.

For some, that’s certainly more than enough. I have no doubts we’ll be seeing plenty of incredible skillshots on YouTube in the coming weeks and months. But if you’re unsure, this is a rent first, buy later kind of game. It’s polarizing without a doubt – this is no Call of Duty. Some will be appalled while others will hail for joy at the gushing blood and putrid vernacular. Those who like Bulletstorm will love it, and those that don’t… 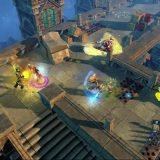 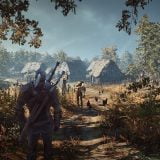 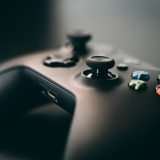 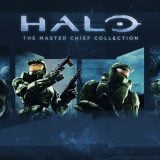 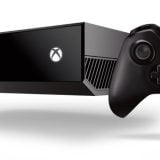 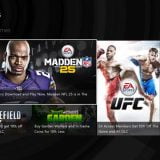