As the technology behind the best projector in 2016 continues to improve year in and year out, consumers in the market might be left scratching their heads, asking: what do I need to know to make the best choice?

There are wide variety of projectors, all of which offer their own benefits and drawbacks.  Some are geared towards business use, while some are designed to be used for a home theater or gaming. Fold in the types of projector technology (DLP, LcOS, LCD), a whole mess of specs (brightness, color depth, fan noise, latency, bulb life, maintenance, etc) and it’s any wonder how one decides on the right projector.

Fortunately, we’ve done the hard work for you and everything you need to know about the best projectors for 2016 is just a read away.

On its own, the specs of the Epson Home Cinema 1440 might be enough to sell you on it without even asking twice. Most of what you get is fairly standard, but where 1440 really stands out is in its staggering 4400-lumen rated display capabilities.

This makes it the perfect pick for anyone who prefers to watch more of their media content during the daylight hours (read: sporting events and midday video game sessions), as well as giving you the maximum possible color representation when all the lights are turned down low for an incomparable home theater experience. For these reasons, we’re naming this our best home theater projector.

Just looking at the shell of Sony’s latest HD projector, and you can tell this is a device that means serious business. What the VPL-HW65ES lacks in sexy marketing, it more than makes up for in its absolutely staggering 120,000:1 contrast ratio that blows any competition in the space clear out of anyone’s living room.

The VPL is perfect for gamers with an input lag of just 21ms, which, while it may not measure up to other LED screens out there, still leads the projector market as one of the fastest LCoS projectors around. This is our best projector for gaming of the ones we tested.

BenQ is a rock in the home theater industry, and the latest HT4050 projector from the company continues that legacy with an entry-level cost that won’t break the bank by the time you hit the checkout counter.

At $1,399 retail, the pricetag of the BenQ HT4050 carries with it a refined picture, one that exudes deep, rich, blacks, a stellar contrast ratio, and 2000 lumen brightness rating. This may not make it one of the most powerful projectors on this list, but the HT4050 is still a solid pick for anyone who wants a projector priced right in the middle, but all the features you’d expect from an entry at least three times the cost.

The HD28DSE makes it on to this list not only for its extreme portability (at stock the projector measures in at a feather-light 5.7lbs), but also for its consistent performance in dozens of different lighting situations. 100% brightness uniformity is hard to achieve for most projectors, but then again, the HD28DSE isn’t like most projectors.

In testing from several different respected outlets, the Optoma was able to achieve a brightness uniformity of nearly 90%, with only a slight gap in picture quality that appeared around the outermost edges of the picture. At just $1,599, this makes it a must buy who demands the most even, well-rounded viewing experience out of their next projector.

Of course, no projector list would be complete without a short-throw model to mix things up. Not everyone has the luxury of more than six feet of space between their couch and their screen, which is why short-throw lenses like those found on the Acer H6517ST are perfect for the home theater connoisseur who might be a little more cramped than the rest.

The H6517ST squeaks in at the bottom of our list because while it’s got a spectacular throw distance to get to the maximum picture size (just 9 feet of space is necessary for the full 300″ experience), its contrast ratio and bulb life could be slightly better, considering the sticker price.

Key Factors to a Good Projector

When you’re in the market for your first projector, you’re going to want to keep an eye on three key features: bulb longevity, the different resolutions the projector is capable of displaying, and a high lumen rating.

The first is measured in what’s known as “bulb hours”. These are important because bulbs will only last a certain amount of time before they eventually start to lose some of their luster, and the longer a bulb is rated to last, the longer you’ll be able to enjoy your content while it’s looking its very best. On average, a good bulb hour length is anywhere from 10 – 20,000 hours, depending on the type of technology your projector uses to display an image. Replacing a bulb can cost anywhere from $60 up to $250 depending on the model of the projector you eventually choose.

Next, there’s the lumen rating. Lumen ratings measure the absolute maximum brightness you can expect out of the projector, a key component for anyone who plans to do the majority of their watching during the day when it may be harder to see darker movies or all the details you need to in your games. 1000 lumens is the sweet spot for night watching, while you’ll want something a little closer to 4000 lumens if your projector screen is near a window or experiences a lot of glare while the sun is still in the sky.

Last, always make sure your projector is capable of handling at least 1080p resolution, as 720p doesn’t scale well with the types of image sizes that standard projectors are capable of putting out. 4K projectors have begun making a splash on the scene as of late, but they’re priced so far beyond what you’d pay for a 1080p that it’s already obvious which one is which.

If you can, do your best not to think about price as the end-all be-all factor in which projector you ultimately decide to go with. Projectors are a hefty investment upfront, but their utility, portability, and longevity is simply unmatched by any other display technology on the market today.

Next, always remember to carefully measure out the space you plan to project in before buying your next projector. If you need to project in a space that’s less than six-feet from where the projector will be mounted to where the screen sits, you’ll have to invest in a short-throw model over a regular long-throw. Calculating the exact distance you’ll need to get the picture size you want out of your projector is easy if you use the tool provided here.

So Which Projector is Right For You?


If you’re strictly looking for as much brightness as you can get for the best day-watching experience, the Epson 1440’s lumen ratio simply can’t be beat. If you’re after picture quality, the Sony is the best in its class, And for smaller living rooms, the Acer is a great short throw that won’t break the bank.

Whether a 70″ flatscreen still isn’t big enough for your next big Super Bowl party or you just want to be blown away every time you watch a new movie, the best projectors for 2016 are sure to make anyone feel like they’re getting the full movie theater experience right from the comfort of their own home. 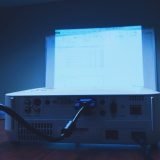 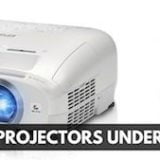 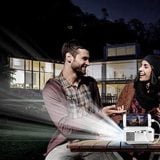 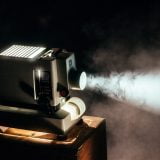 What Resolution Do I Need for a Projector? 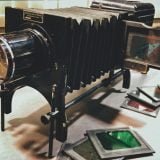