To help you find the best gaming PC, we have tried out a multitude of top products, testing them for processor speed, ensuring they can run recent releases on average or high settings, and graphics capabilities, preferring computers installed with high quality video and graphics cards. We also liked items with plenty of connectivity options, for the purposes of running audio and video to another device, and easy integration with VR rigs.

The best model we tried was the CyberpowerPC Gamer Xtreme Gaming PC, which boasts a powerful Intel Core i5-9400F 2.9GHz 6-Core processor and a state-of-the-art NVIDIA GeForce GTX 1660 6GB video card. There are plenty of connectivity options, including HDMI, DisplayPort and 8 USB ports, and the see-through case makes for an attractive aesthetic. The including gaming mouse is also of a high quality. Keep reading to learn more about the CyberpowerPC Gamer Xtreme Gaming PC and the other products on this list.

WHY WE LIKE IT: Extremely high quality gaming PC bundle that includes a computer with a powerful ninth generation Intel Core processor and a NVIDIA GeForce GTX 1660 graphics card, shipping with a fantastic gaming mouse and keyboard.

The CyberpowerPC Gamer Xtreme Gaming PC is a spectacular all-in-one gaming PC bundle that has everything you need to get going with recent releases, including full integration with popular VR systems, including Oculus Rift and HTC Vive. The graphics are state-of-the-art, thanks to the included NVIDIA GeForce GTX 1660 6GB video card, and the storage is plentiful, with a 240GB solid state drive and a 1TB hard disk drive. We also loved the included gaming mouse and keyboard, both of which are of a high quality, and the multitude of ports on offer, including HDMI, DisplayPort and eight USB ports.

Though we found the Intel Core i5-9400F 2.9GHz 6-Core processor to be fast enough to run modern games at advanced settings, there are speedier processors on this list, including our number two pick. Additionally, it only comes with 8GB of DDR RAM, whereas our number two pick comes with 16GB, though it is easily upgradeable with a maximum of 64GB of RAM. The best gaming chair will also keep you comfy while gaming. 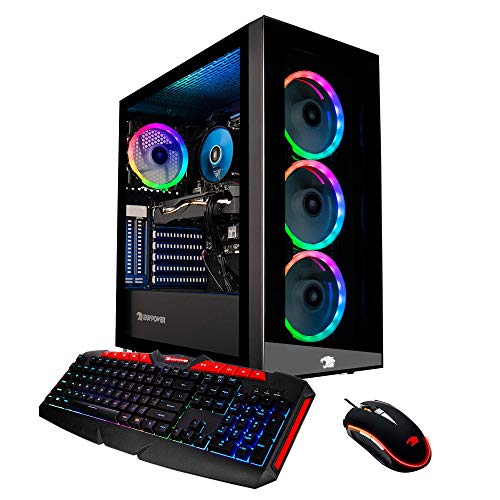 Our #2 Pick is the iBUYPOWER Pro Gaming PC
Check Price

WHY WE LIKE IT: Boasts an incredibly powerful and speedy Intel Core i9-9900 8-Core 3.10GHz processor, that can be overclocked to 5.00 GHz, and 16GB of DDR RAM, with these features combining to easily handle modern games at high settings.

This iBUYPOWER Pro Gaming PC is a fantastic build, featuring a Intel Core i9-9900 8-Core 3.10GHz processor, that can be overclocked to 5.00 GHz, and 16GB of DDR RAM, along with the same NVIDIA GeForce GTX 1660 6GB video card found with our top pick. We found that it had no trouble running modern games at max settings, including VR applications, and the four built-in large fans help to keep things cool as you play. We also liked that the OS installs clean, without any unnecessary bloatware.

Though there are enough ports on offer to handle most tasks, including a DisplayPort and HDMI, there are less USB ports available than with our top pick, just four USB 3.0 and two USB 2.0. Also, it ships with a generic 500 watt power supply, and if you are looking to overclock the system we’d recommend purchasing an additional power supply of around 850 watts. Don’t forget the best gaming keyboard for your PC games.

WHY WE LIKE IT: Budget-friendly gaming PC that doesn’t skimp on the high end features, featuring a fantastic NVIDIA GeForce GTX 1660 TI 6GB video card and excellent protection from overheating, including a trio of large fans and chips outfitted with heat spreader tech.

The SkyTech Blaze II Gaming PC is the best budget gaming PC we tried, with a bevy of high end features, including a Ryzen 5 2600 6-Core 3.4GHz, which can be overclocked to 3.9GHz, and an excellent NVIDIA GeForce GTX 1660 TI 6GB video card. We also found that this model did a great job at heat dispersion, even while running games at max settings, thanks to a trio of large RING fans and chipsets outfitted with heat spreader technology. Keep your gaming cool.

Though this PC does come installed with a blazing fast 500GB SSD, it does not also include a larger HDD, for additional storage, though there is plenty of space to add your own. Additionally, it only features 8GB of DDR RAM, which could impact multitasking performance. You’ll also want the best gaming headset to chat with your friends.

WHY WE LIKE IT: Ships with a robust software suite, that allows for overclocking and cloud gaming, with a powerful ninth generation Intel processor, 16GB DDR RAM, which is upgradeable to 64GB, and a 512GB SSD.

This HP Omen Obelisk Gaming PC comes preinstalled with a suite of proprietary software, which we found to be useful, allowing you to adjust a variety of metrics, including the external LED lighting, and stream free games via a cloud service. The PC itself is of a high quality, with a 9th Generation Intel Core i7-9700K 3.60 GHz processor, a 16GB of DDR RAM and a speedy 512GB solid state drive. There are also plenty of ports, including several USB 3.1 options.

Though this PC does ship with a keyboard and mouse, they are not dedicated gaming devices and, as such, aren’t of the highest build quality. Also, there are just two fans running throughout, which we found to be something of an oversight, despite the processor being liquid cooled. You can also check out the best gaming laptops for something more portable.

To help narrow down to the above list, we preferred computers that could easily handle a wide array of modern gaming titles at maximum or near max settings. To that end, we picked models with powerful processors, often Intel-produced, and those with state-of-the-art NVIDIA graphics cards.

We liked PCs with plenty of DDR RAM, as much as 32GB, and if the RAM was on the lower side, as was the case in a couple of picks, we made sure that expanding was somewhat effortless, with easy-to-open frames and plenty of room for expansion. We also preferred models with a large amount of hard drive space, often with a combination of SSD and HDD drives.

To round out our “must have” features, we looked for computers with plenty of ports, including HDMI, DisplayPort, USB 3.1, USB 3.0 and USB 2.0, among others. We also liked aesthetically pleasing frames, often see-through, and computers that shipped with a high quality gaming mouse and keyboard. Finally, we made sure that each item on our list had, at the very least, a one year parts and labor warranty, with many offering lifetime technical support. Don’t forget about the best gaming accessories.

What is the best computer for gaming?

The efficiency and efficacy of gaming computers change somewhat often, thanks to advances in technologies. To ensure you have the best build for 2020, just keep an eye on video cards and processors, ensuring you have installed the latest and greatest models.

How much RAM do I need for gaming?

Generally speaking, you can get by with 8GB, if you are willing to play on average or lower-than-average settings. If you want to play with max or near max settings, go with 16GB or higher. Modern gaming PCs can support 64GB of DDR RAM in most cases. 32GB and 64GB may be overkill, to an extent, but will adequately “future proof” your setup.

Lawrence Bonk is a copywriter with a decade of experience in the tech space, with columns appearing in Engadget, Huffington Post and CBS, among others. He has a cat named Cinnamon.