The Amazon Echo Dot is a fantastic introduction to smart home devices. Likewise, it’s also an excellent choice for those already familiar with smart home devices. It comes with Alexa built-in, and the revamped design gives it the class and sophistication it needed. Check out our list of best smart home devices to how it stacks up against the competition! 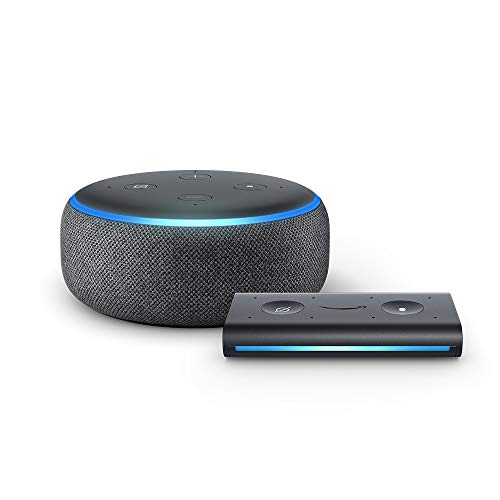 The Amazon Echo Dot looks good, seemingly taking design tips from the Google Home Mini, and sounds great, especially if you’re talking to Alexa or making a phone call. While it may be slightly larger than the previous model you have to give Amazon credit for realizing that their previous hockey-puck version just wasn’t cutting it.

The Amazon Echo Dot has a much better Alexa App which makes it easier to group other smart home devices, such as other echo dots if you so please, together. The revamped audio system of the 3rd gen echo dot gives it better sound quality than previous echo devices. While it works great for calls, you may want to opt for the Echo Plus if you’re going to play music for an extended period. If you’re looking for something a little less high-tech and just want something to control the temperature in your house, the Google Nest Learning Thermostat 3rd Generation should have you covered.

It seems as though the 3rd generation Amazon Echo has been taking design advice from the Google Home Mini. The new Dot has rounded edges and a fabric grille around the edges which gives it a touch of class. You also don’t have to worry about Alexa as the voice assistant is built-in with all Amazon Echo smart speakers. Simply say Alexa and her familiar voice should come through the smart speaker. Of course, if you want something truly compact and highly transportable, then consider the Gosund Smart Plug Outlet Home Device which is perfect for the minimalist home and comes with four plugs.

The third generation Echo Dot gives some added benefits to prime members like access to Amazon Music through your new echo dot. The Echo Show 5 also offers Amazon Music free for their customers for four months too so check it out if you feel the Dot isn’t quite working for you. The Echo Dot currently retails on Amazon for $80.00 which is a fantastic price for a smart speaker as feature-loaded as this one. On a final note, the Echo Dot also alerts you if there’s something wrong in your home, which is always a nice feature to have.

All of the features on the Amazon Echo make it a leader in the 3rd gen smart devices world despite fierce competition from the google assistant. The larger echo may lack some music playback capabilities, and the warranty isn’t the greatest, but it’s improved design shows us that Amazon takes improving it seriously, so the 4th generation onwards should be able to fix these problems as well.