The appearance alone of the Altor SAF is a theft deterrent –like having a tattooed 6’5” 300-lb. mean looking dude stand next to your bike. Being so highly specialized it’s not among those listed in the best bike lock buyer’s guide, but is undoubtedly the beefiest U lock on Earth. If your needs are more ordinary then consider the Via Velo Bike U Lock with Cable, or if seeking a relatively high level of protection for less cost then check out the Kryptonite New York Standard Heavy-Duty Bicycle U Lock. 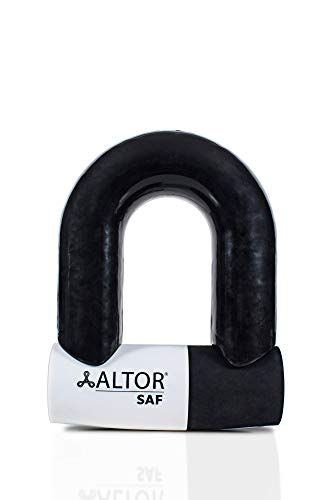 The ALTOR SAF is a monster among all U locks. It is the ultimate bike lock from a theft deterrent standpoint. Not something to take along riding, but extreme protection for stationary settings where a bike (or anything) is going to be unattended for prolonged periods. Provides protection against even criminals armed with power tools!

Say you’ve got an expensive e-bike or high-end bike that you need to leave for a time in a less-than-secure area. No alternative. The SAF lock gives you peace-of-mind that there’s a high probability your bike will be there when you return. Make sure whatever you’re locking to is at least as strong. Probably easier to cut apart many bike racks than the SAF lock. Obviously the SAF is heavy and not really intended for ride-along portability. More for stationary settings. This is not the lock for all people certainly, but a lock for all times as an extreme anti-theft device. Its weirdly odd sizing may not be suitable in every locking situation. A more suitable-sized lock is the Amazer Heavy Combination Bicycle Theft U lock which you can also easily ride along with.

The 80mm diameter of the SAF shackle is cartoonishly huge, although really a 14mm hardened steel shackle core wrapped in a patented aluminum tech shell with ‘baffles’ inside to make cutting challenging, covered by a soft outer coating to prevent scratching a bike frame. The SAF tech shell claims to be the world’s first angle grinder proof lock. Crooks with battery powered angle grinders are out there, but seeing an Altor SAF makes ‘em say fahgettaboudit. The SAF is maybe not “grinder proof” so much as cutting it takes hours. Coupled with a double lock crossbar using a disc detainer mechanism opened with laser engraved keys, this lock is as hard to pick as it is to cut. Being massive the SAF weighs over 13 lbs. Cyclists are typically weight averse, so few would consider taking an SAF with them on a ride. A better choice as a take-a-long might be the SIGTUNA Bike Locks Heavy-Duty U Lock.

The price of the Altor SAF is stratospheric. After you’re over the sticker shock, weigh its price against the value of what you’re protecting, where you’re locking it up, and for how long. Losing a bike to theft can be (okay, it IS) traumatic and disruptive. If you’ve been victimized and don’t want to be again, or you live where there’s an ongoing rash of bike thefts, the SAF will provide peace of mind and likely put an end to repeat theft attempts.

The Altor SAF lock is likely the biggest bike lock you’ve ever seen. While true that there’s no single type of bike lock that can completely eliminate bicycle theft risk, this one may challenge that axiom. The SAF is serious security for those who are serious about security and are willing to pay for security. And it probably could be used as a weapon as well. A bike secured by an Altor SAF is protected against theft to the greatest extent possible.