I know kitchens aren’t usually synonymous with Best Grills, but a good grill could do wonders for your cooking potential. Specifically, you’ll want to be looking for the Best Indoor Grills. And to this end, the All-Clad Electric Grill should be on your list of considerations for its unmatched power and incredible ease of use. 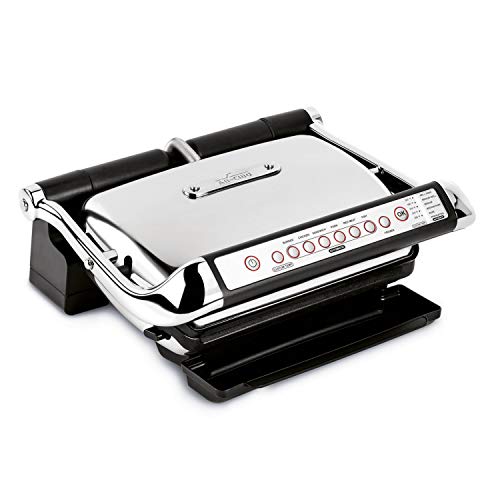 The All-Clad Electric Grill is an impressive grill that does well to compete with larger brands. It’s power, first of all, is among the highest we’ve seen, and the cooking surface is large enough to feed a hungry family of four or your friends in a small get-together.

The All-Clad Indoor Grill has a maximum temperature of 525℉, which is the highest we’ve seen on an indoor grill so far. Of course, not everybody is going to need this much power, so you can opt for the Secura GR-1503XL if you still want something powerful, just not as powerful. The real advantage here is that the All-Clad offers six cooking modes from just the push of a button so there won’t be any need for you to set the temperature if you’re not sure!

Unfortunately, no direct measurements of the surface area on the All-Clad is given, but the product page on Amazon states it can serve up to four people. And judging by customer reviews this isn’t an exaggeration. But you can check out the Hamilton Beach Electric Indoor Searing Grill if you’d like something that can feed up to six. Further, the All-Clad can do sandwiches because the cover can double as a press.

Twelve pounds isn’t heavy by any stretch of the imagination. But it is just a little on the heavy side for an indoor grill. At least in our opinion. You can opt for the Zojirushi Indoor if you’d like something that weighs almost half that. On the plus side, the All-Clad is constructed from stainless steel which is much more durable than the plastic or aluminum most other indoor grills are made from.

The All-Clad is equipped with AutoSense Technology that automatically adjusts temperature according to the thickness of the meat and even adapts to frozen meat or vegetables. Of course, you can always use the presets mentioned previously too. After you’re done cooking, the grill plates pop out easily and are dishwasher safe making clean-up much more efficient.

Reviews are a little scarce on Amazon, to be sure, but it still holds a respectable rating of 4.5 out of 5 stars based on 23 reviews. The grill itself looks very nice, very sleek and sophisticated. Although buying an indoor grill that looks nice probably isn’t very high on your priorities list, it’s always nice when something attractive is able to decorate your kitchen.

There are some missteps with the All-Clad Electric Grill, but it’s still a fantastic grill worthy of a place in your kitchen if you’re debating putting one there. It can double as a press if you enjoy making grilled sandwiches, or just want to make some quick grilled cheese for dinner, and its six cooking modes plus AutoSense Technology help find exactly the right temperature to cook your food.