When looking for the Best Air Purifier, or more specifically the Best Ionic Air Purifier, people probably want something that has an increased chance of thoroughly purifying the air, and the Fellowes Aeramax 100 air purifier may be that purifier. It has 3 ways to purify the air around it. 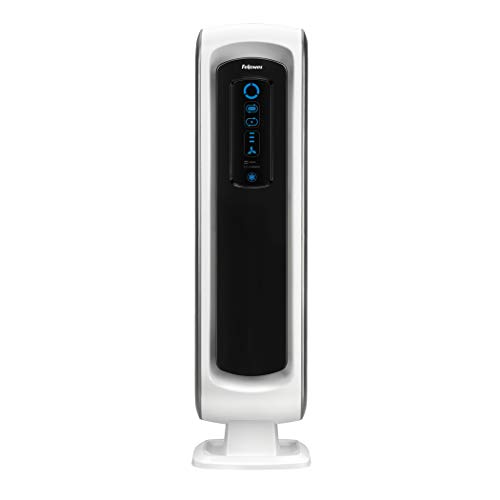 The Aeramax 100 air purifier improves indoor air quality through the Aerasafe antimicrobial treatment, offering a slight deviation to the common air purification process: It filters a wide array of contaminants by having more than 2 ways to clean the air, and prevents various sources of odors from forming and developing.

Unlike the Pure Enrichment air purifier filter, it doesn’t have features such as a UV C light or a photocatalyst filter. Instead, in addition to an Ionizer, it relies on two filters: A true HEPA filter and a carbon filter. The HEPA filter has a 4-stage filtration system while the carbon filter captures the larger airborne particles. The fan speed has 4 settings and can be automatically adjusted.

Versatility (HEPA, what does it filter, odor reduction etc.) –

Since it has a true HEPA filter, it has the ability to filter through a variety of air contaminants. It captures pollen, certain viruses and germs, mold, odors, dust, smoke, allergens, and pet dander. What makes AeraMax air purifiers stand out is how they offer something called the Aerasafe antimicrobial treatment, which is the ability to use two different types of filters at the same time while aiding in preventing odor caused by contaminants caused by bacteria and fungi.

This air purifier isn’t the lightest purifier around since it weighs 9.24 Lbs., weighing less than the Aeramax 300, which weighs 12.5 Lbs. Since it’s an air purifier, it will inevitably have weak points to allow the air to travel through it in order to be filtered. However, it’s designed to provide great performance despite having less holes, making it have less vulnerability compared to the more common purifier designs.

While it’s cheaper for a powerful air purifier and has a very simple design, it contains parts that provide a higher quality version of its simple purpose. The True HEPA filter, the carbon filter, and the Aerasmart technology are probably what affects the price the most. Some customer reviews have addressed that the carbon filter needs a filter change at a higher frequency compared to the true HEPA filter since it gets dirtier so easily.

Customer reviews have mostly been positive, praising the air purifier for its performance and low noise level. One reviewer said that it’s great for dealing with pet-related odor and contaminants such as litter box dust. Another reviewer said that it can detect farts if they’re released at a close enough proximity.

Bottom Line
Reader Rating0 Votes
0
What We Liked
What We Didn't
7.6
Expert Rating