The Acer Chromebook Spin 713 is a premium chromebook that aims to outdo the Pixelbook Go, packing in similar hardware, better build quality, and a better screen at a very similar price point to a similarly spec’d Pixelbook Go. It largely succeeds largely thanks to its great display, but its mediocre battery life and above-average weight stop it from being the definitive choice over the Pixelbook Go. Nevertheless, it’s a very strong contender for the best chromebook for business thanks to its great screen and blistering performance. 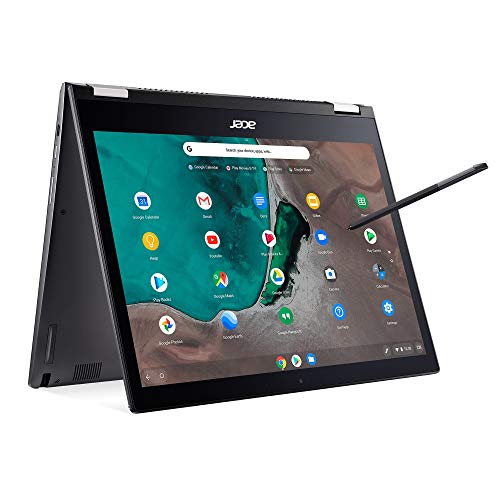 The Acer Chromebook Spin 713 is a high end chromebook with great hardware, an excellent screen with Gorilla Glass protection, and a surprisingly reasonable price tag. It’s a rare case of a premium chromebook that almost justifies its high price, which is a feat in and of itself considering the limitations of Chrome OS. For a decent mid-range chromebook, go ahead and read our Acer Chromebook Spin 15 Cp315 Review.

The display on the Acer Chromebook Spin 713 is a weird one. Rather than using the standard 16:9 or less-common-but-used-for-business 16:10, it employs a 3:2 screen akin to what you’d find on a Microsoft Surface device. This results in a laptop with a very tall panel that’s noticeably chunkier than a 13” 16:9 laptop, though the extra height is appreciated for working on documents and browsing the web. Brightness is fine at around 350 nits, and colors are bright and vibrant; there’s very little to complain about here. Its display is similar to what we described in the Asus Chromebook Flip C302 Review.

Battery life is very average on the Acer Chromebook Spin 713. With the brightness turned down, you’re looking at 8 hours on a single charge top, a figure that falls far behind lower end offerings and is only average compared to higher end ones. The Asus Chromebook Flip C434 blows past it with nearly 10 hours of battery, enough to last through a work day and still have enough juice left over.

At 3.22 lbs., the Acer Chromebook Spin 713 is reasonably lightweight, though noticeably dense for its size class. This can be attributed to its aluminum chassis; aluminum is denser than plastic or magnesium, and it definitely shows here. It won’t make for a great tablet experience, but it’s still light for a laptop, and carrying it around shouldn’t be an issue at all.

With an aluminum chassis and Gorilla Glass screen, the Acer Chromebook Spin 713 is fairly durable. Gorilla Glass is highly scratch-resistant, while aluminum makes for a sturdy material just overall (when it comes to technology); it should hold up over the test of time easily.

Port selection is great, with very little to ask more of. You’re looking at a single USB A port, 2 USB C ports, a microSD card slot, and an audio jack, though there’s no HDMI or (mini) DisplayPort available. Its keyboard has good spacing, but the keys feel a bit soft and mushy when pressed, providing a decent but unexceptional typing experience.

The Acer Chromebook Spin 713 is a great device for the right audience. If you’re looking for a machine with one of the best screens on the market, speedy performance, and all-day battery life, this is the computer to get; it’s one of the best chromebooks on the market by far, but that status comes at a significant premium. Chrome OS has major limitations that are bleedingly apparent at this price point considering how underutilized the Core i5 8250U is when it’s used just for web browsing; this is a chip that’s almost as fast as the previous generation’s Core i7 7700HQ. Chrome OS just doesn’t have the program compatibility to make use of hardware like that, making its limitations frustrating for anyone that wants to use the 8250U. Despite Chrome OS’s limitations for power users, if you want a machine that just works, this is nearly as good as it gets.