What could possibly be the best laptop for students and the best laptop for its pricing, the Acer Chromebook 314 is a laptop that has compatibility with different software such as Android apps. It has a solid state drive that provides fast file transfers and performance, and allows the laptop to have a slim appearance. 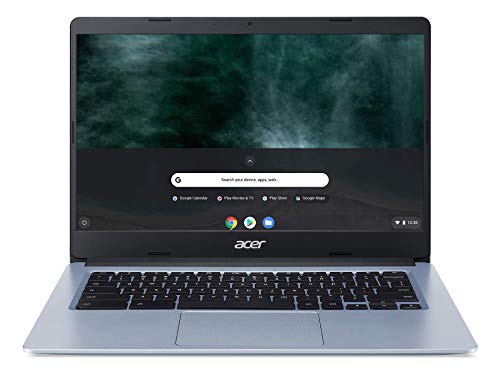 The Acer Chromebook can download and run Android apps, especially via Google Play. It has full HD, has a solid state drive, and has fast wifi connection speed. Also, the user has the option to choose whether or not they want their Chromebook to have a touchscreen feature.

This Chromebook contains an Intel Celeron N4000 processor, unlike the Dell XPS 13 7390, which contains the newer and faster Intel core i7. While this dual core processor isn’t as powerful as processors such as the Intel core i5 or the Intel core i3, it still allows the laptop to perform a wide range of tasks with decent speed, such as using Google Chrome to edit documents on Google Docs.

The Acer has a great battery life, being able to operate for about 12.5 hours at maximum before it needs to recharge. It slightly surpasses the Dell Latitude 7490, which has a battery life of 12 hours. However, it only has a battery life of 5 hours on average, meaning that the user would probably have to adjust the settings of their laptop to ensure that they can get the most out of their battery without sacrificing security and convenience.

This assortment of ports consists of USB 3.1, DisplayPort, and USB Type-C ports. The DisplayPort is one of the best port types to display visuals, and the USB Type-C offers fast charging to any smaller device that can connect to it. The laptop is capable of wi fi with gigabit speed in addition to having the 802.11ac wireless communication standard. It also provides Bluetooth connectivity to add even more options for device connectivity.

It has an aluminum chassis for better durability compared to any equally slim plastic-clad counterparts, and it weighs 4.86 Lbs., making it lighter than the Dell G5 15 5590, which weighs 6.13 Lbs. However, unlike the Dell, the Acer is able to adorn a slimmer, but still durable appearance due to not having ports located on the back of it, and all by not having fan vents occupy most of the edges of the laptop.

The pricing is as low as it is because of its specifications, as they are provided by components that are not the most up-to-date or can provide specifications that are suitable for things such as modern gaming. This laptop will also last for much longer since it also lacks an optical drive, giving the laptop less of a chance to develop weak spots should the drive malfunction or even break. However, if the user wants a Chromebook with a touchscreen, it would cost about $90 more.

Customer reviews have mostly praised this laptop for its fast performance and long battery life. A couple of reviews have noted that it’s great for school and work, and another review stated that the keyboard feels nice and comfortable. Keep in mind that not all versions of this particular Chromebook doesn’t have a touchscreen.

Bottom Line
Reader Rating0 Votes
0
What We Liked
What We Didn't
8.8
Expert Rating