The best Chromebook for Business needs to be something rugged, perhaps a number pad, and an incredibly long battery life. That sounds an awful lot like the Acer Chromebook 715. Built with a metal chassis, it can take a few hits and keep moving. On top of that, it has a battery life that handles an entire work day. 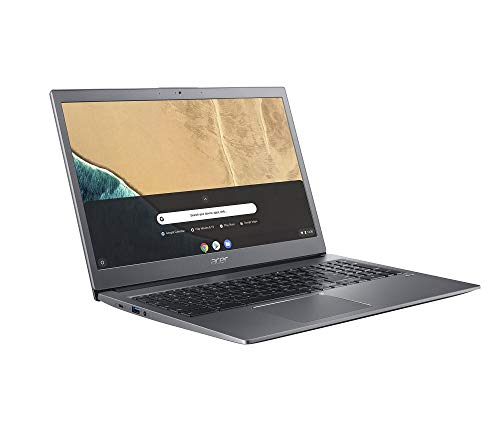 Built from premium aluminum, the Acer Chromebook 715 is built to take a beating—and when you’re on the move, that’s a must. There’s even a fingerprint reader to protect your files.

The Acer Chromebook 715 displays in beautiful full HD, with an IPS panel that allows for a wide variety of viewing angles. Its screen size is 15.6-inches, which is right on par for laptops of this size and pixel density is quite nice.

Battery life is phenomenal. Since you’d want to use this in a business setting, the battery is being drained by gaming and whatnot, allowing it to go on for long, extended periods of time. Fully charged, you can get up to 16 hours of battery life, 2 hours more than the HP Chromebook X360 14.

Built to take a beating (though we wouldn’t advise sparring with it), the Acer Chromebook 715 is built with a sleek, premium all-aluminum chassis. It’s going to survive a drop four feet high and withstand 60kg of downward force. However, it’s 6 lbs. That isn’t heavy, per se, but certainly noticeably when carried.

You’ve got a healthy selection of inputs to play with. Bluetooth is included, along with 802.11ac Wi-Fi and a fingerprint reader. For ports, you get DisplayPort over USB C ports, two USB 3.1 Gen 1 Type C ports, and 1 USB 3.1 Gen 1 Type A. You also have 64GB of storage to fill, which is admittedly small. The Google PixelBook Go has twice the storage.

While the Acer Chromebook 715 would have benefitted from an Intel Core i5, it’s still leagues better in processing than the Asus Chromebook Flip C434, by a large margin. Everything outside of that is on point, however. It’s durable, has a long battery life, and plenty of ports for optional PC peripherals. You’re getting a great deal for $650.

The Acer Chromebook 715 is a fantastic option for business. It hits all the right points, though a better CPU would have been advantageous. Battery life is important, so Acer gave it 16 hours to work with. It needs to be durable, since you’re traveling, so it was given an all-metal chassis. And you get a built-in fingerprint reader for added security. Perfection!