If you’re looking for a 4K Blu-ray player and also like gaming, the Microsoft Xbox One S is a fantastic option and made our best blu-ray player list. As a game console, there’s an extensive list of Xbox One games, and you can even play against your friends using the Xbox live service. As a Blu-ray player, it has great picture quality and HDR support. 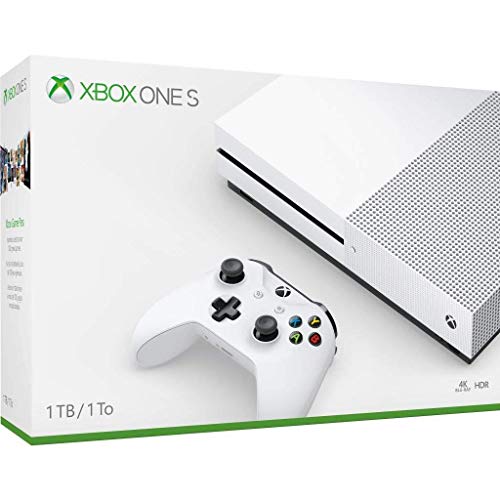 The Microsoft Xbox One S offers the best of both worlds. One one hand it’s an ultra HD Blu-ray player, and on the other, it’s a gaming console. In addition to watching the latest Ultra HD movies, you can also play many Xbox one exclusives like Forza Horizon and Sea of Thieves.

The original Xbox One came out a few years ago and has now been split into the Xbox One S, and Xbox One X. The One X is the most powerful gaming console on the market, but the One S is still a great performer. It comes with either a 500GB or 1TB hard drive. Some of the standard features are the 4K blu-ray player, and gaming abilities. If you need more gaming power, the Microsoft Xbox One X is a better choice. If you only need a 4K Blu-ray player, then the Panasonic DMP-UB900 is a better bet.

The Xbox One S is smaller than the original Xbox One and comes in white instead of black. It has a modern design and comes with pinholes instead of vents. The console comes with one USB port in the front and two in the back. There are also two HDMI ports, one S/PDIF port, and an ethernet port. Depending on the model you choose, the Xbox One S comes with either a 500GB or a 1TB hard-drive. Another well-designed 4K Ultra HD Blu-ray player is the Samsung UBD-K8500.

The Xbox One S offers exceptional value because you get a gaming console and a 4K Blu-ray player in one package. There are also different variants of the Xbox One S available with different storage capacities and with either one controller or two. For this console Microsoft went out of their way to add the 4K compatibility so it can act as a fully-fledged media center for the price of a normal Blu-ray player. If you need something even more affordable, the Philips BDP7501 will get the job done.

Xbox One S Wrap Up

The Xbox One S is a great combination of gaming console and blu-ray player. It’s getting replaced with a new console by the end of the year and might get even cheaper. Unlike the One X, this console doesn’t play games in true 4K. That said, it’s much cheaper and the games still look fantastic.

After quitting IT hell I found a new lease of life as a writer. I currently follow my passion, writing about different topics like product reviews, video games, and insurance.