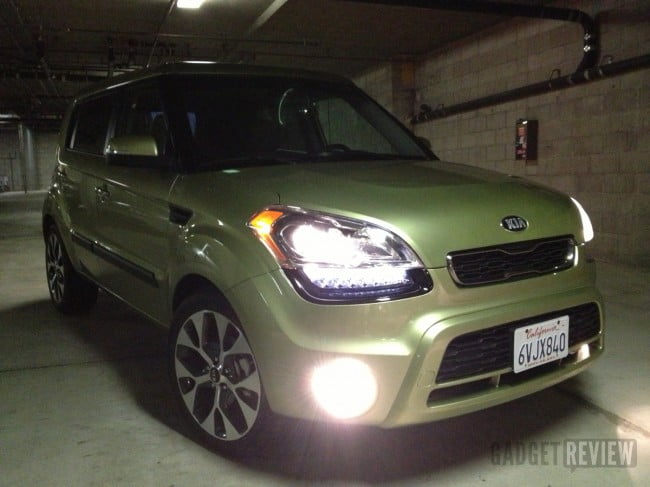 I never thought that anything associated with a hamster, and an oversized hamster at that would have any draw or appeal.  After all, they’re hamsters.  Vermon that convey no disdain for running for hours inside of a plastic ball only to go no where.  One could say they’re all together counter productive creatures that have nothing to celebrate.  But ask Kia and they’ll tell you otherwise.  Or at least show you otherwise in their Kia commercials, which feature the oversized rodents partying in celebration to the Kia Soul’s stereo system, complete with color changing speaker grills.  But perhaps there it is.  The simplicity in such a feature causes them to joyously celebrate.  And while I can’t or won’t, or wasn’t in such an uproar over the novel feature, it’s the most notable in the car’s interior and speaks to the Korean manufacturer’s approach to the Soul; fun, playful and other bubbly words that are escaping my overly pessimistic brain. So, what features make it one of the highly-rated cars in the market? let’s find out. 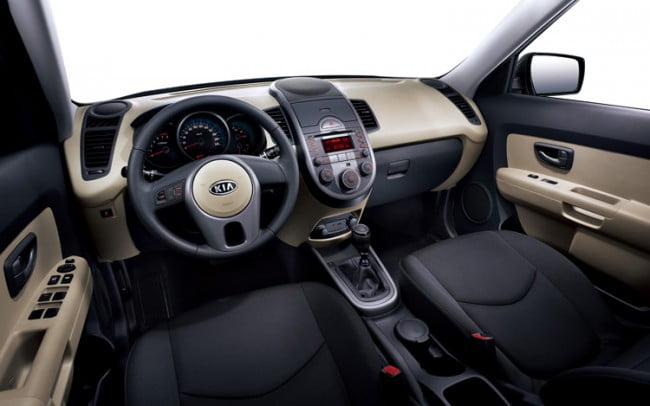 The version of the Soul I drove was “soup to nuts”.  Meaning it had every possible feature, including leather seats.  Though a family member asked if they were such, which I’m not sure was a question derived from astonishment and amazement, or perhaps disbelief.  In my eye there is no disputing that they’re leather, but they’re not the most supple, and nor is the stitching something worth a remark or two.

The dash is largely replete with plastic, and lesser pricey materials, thought it wasn’t vastly evident until my eyes crossed paths with the unsightly speaker that sits front and center.  I applaud Kia’s attempt for a larger sound stage with overall better sonic distribution, but it does disturb the flow of the interior and is reminder that leather is relegated to the seats only. 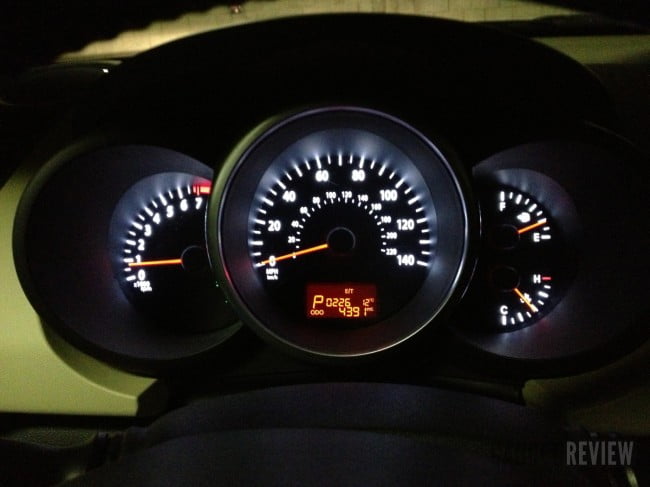 Situated below the center speaker in my Soul was an infotainment system, which does anything but to buck the car’s affinity for plastic.   But let me be candid and emphasis that I wasn’t sitting in a $50,000 car, and really shouldn’t have expected more.  That being said, the layout is one built around utility, and makes the unfamiliar a tolerant and safe driving scenario, even for people like me who suffer from just ok vision – I don’t have 20/20, but I don’t need glasses to drive.

Yet, I simply couldn’t overlook, or miss for that matter, the limited amount of trunk space in the Kia Soul.   Sure, I could easily lay down the seats for more interior space, but as I quickly learned, it’s suitable for perhaps one large suitcase, unless of course you’re willing to compromise your rear view visibility.  I wasn’t, so the second suitcase sat next to my passenger in the rear seat.

Related: If you like what this car offers, we bet you will also enjoy reading our 2013 Kia Sportage review. 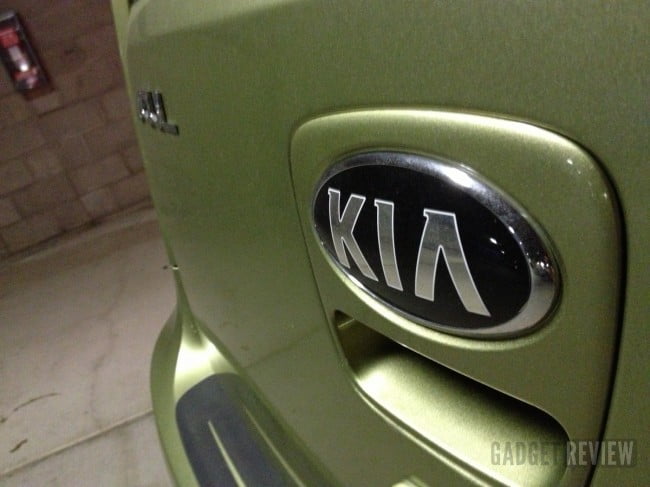 The design language of the Soul is largely reflective of the car’s handling and road hugging prowess.  It’s far from a sports car, but for a four door boxy vehicle it surely did handle the mean streets of LA with no hesitance thanks in part to its 2.0L 4-cylindeer 165hp engine.  That in mind, I’d be reluctant to consider the base model, which includes a rather underpowered 1.6L 4-banger that produces just 138hp.

Brake feedback and feel is solid throughout, as is steering.  The Soul I drove, the Soul !, the top of the line model, sits on 18-inch alloy rims added to the car’s exterior allure, and although I haven’t driven the lesser models with smaller tires, I can only assume the ride is slightly harsher but far more reactive to quick turns.  That isn’t to say the Kia Soul was uncomfortable during long commutes, though the driver leg room is short on space, even with the seat all the way back – I stand almost 6′ 2″. 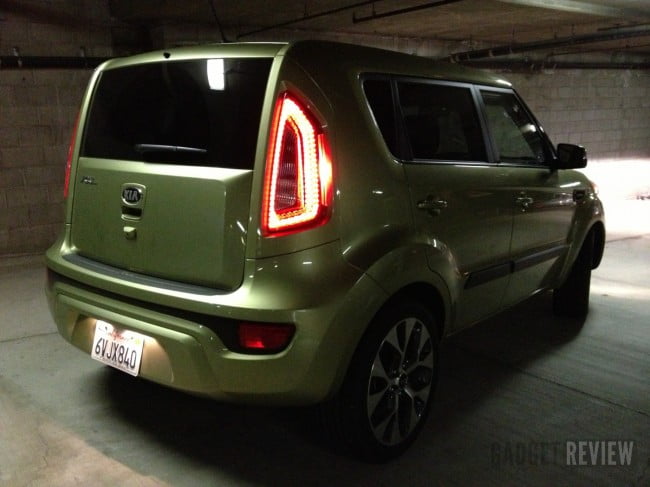 It’s easy to confuse the Kia Soul with the Scion Xb or Nissan’s Cube.  Though my personal preference leans towards the Soul.  Not because it was designed by famed Audi designer Peter Schreyer, but because it’s a step above the aforementioned two in class and sophistication.  The Cube has that overly styled molded corner, and the Xb looks to be something cut from cardboard.  The Kia Soul on the other hand boasts a set of lines that makes the car look down right solid.  The almost effervescent green paint (in my model) is each to their own, but it fits the Soul’s fun and playful design. 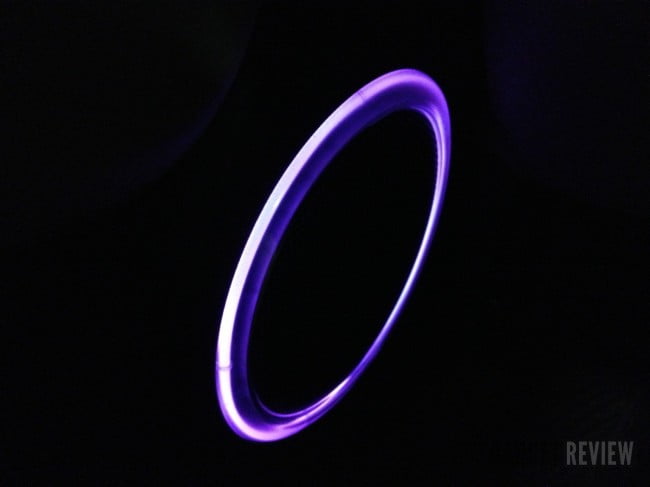 Navigation, heated seats, backup camera, and color changing LED wrapped speaker grills are all included in the Kia Soul ! .  A small dial located behind the steering wheel allows you to change the LED speaker rings’ color and switch between mood or music – the latter bumps to the beat, though it can be a bit distracting for the driver.  The heated seats work sufficiently well, though they’ve got nothing on the more than twice as expensive, and hardly comparable BMW 5A that I recently drove.  The backup camera is useful, especially since the C pillar’s windows are useless and left me with blind spots on both the right and left.  Nevertheless, it’s easy to view directly through the Soul’s back window and judge the distance from the object to the car’s bumper thanks to its shallow, and compromising trunk space. 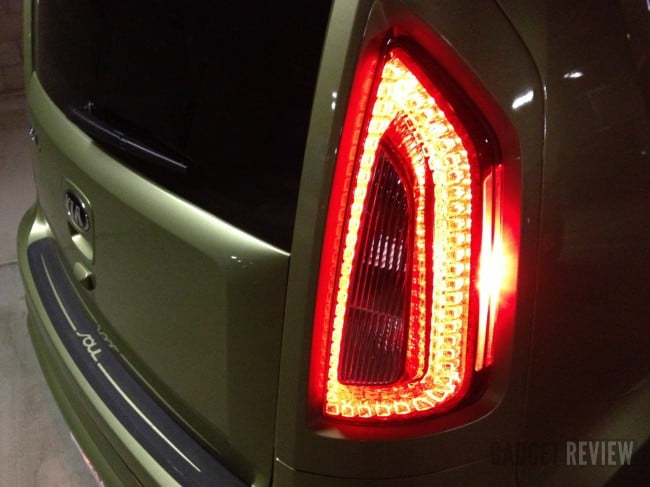 The car’s infotainment system is practical, useful, and works.  Pairing a Bluetooth phone is a simple affair, and while I didn’t perform too many calls over the car’s Bluetooth speaker system, it worked to accomplish both calls and audio playback, though the speaker system leaves a bit something to be desired in terms of its sonic capabilities.

Related: In case you are looking for an ATV winch, read this Warn 90250 Provantage 2500 Winch review. 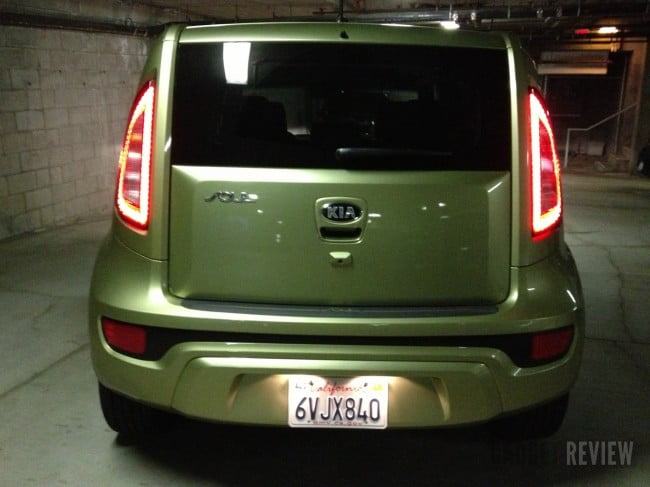 I’m still not sure why Kia choose a group of oversized Hamsters to be featured in their commercials.  I suppose they thought it was a cute, and endearing schtick that would attract a younger generation of buyers, though it hardly seems necessary since the Soul’s stylings seem to exude just that.  “Trying too hard” is probably is an overstatement, especially since the Soul seems to be centered on practical-hipness.

However, my Soul’s total price tag was anything but practical.  With added equipment, the total bill rang to a daunting $23,575.  Not what I’d expect for a car of this ilk, or a car that seems to be largely targeted at millennials, a generation stuck with low paying jobs, or worse, no job at all.  But I should point at that the base model starts at just $14,400.  How this version of the Soul, the “!”, managed to amass an additional $9,000 is difficult to ascertain, on paper or in use.  Sure, it’s outfitted with the more powerful of the two powertrains, and a nav system, but you, as I was, would probably be hard pressed to distinguish between this model and an entry level one even after a few days with the car.

Bottom Line: An all around solid ride that is overpriced in its top of the line model; go with the middle or lower tier. 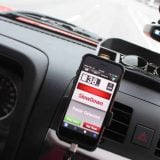 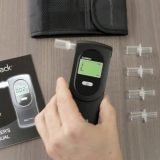 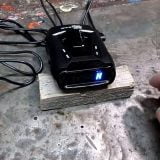 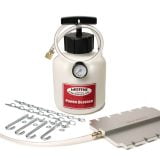 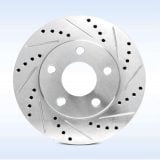 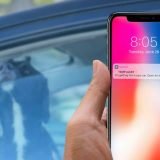